US military ship arriving in Lithuania 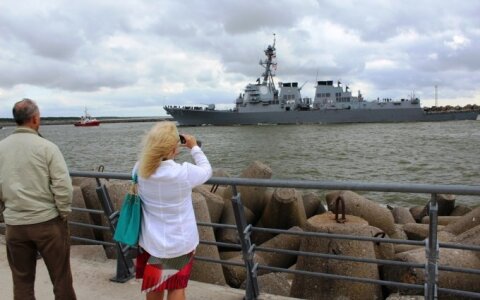 US missile destroyer USS Oscar Austin (DDG 79) will arrive in the Lithuanian western port of Klaipėda on Thursday.

The visit demonstrates the US Armed Forces’ continuous efforts to strengthen ties with NATO allies and regional partners in the pursuit of the common goal to ensure peace and stability in the Baltic region, the US Embassy in Vilnius said.

On Friday, the destroyer will be visited by Lithuanian President Dalia Grybauskaiė, US Ambassador to Lithuania Deborah McCarthy, Minister of National Defence Juozas Olekas and Minister of Foreign Affairs Linas Linkevičius.

The Sixth Fleet of the United States Navy is stationed at Naval Support Activity Naples, Italy. It performs various maritime security operations aimed at bolstering stability and security in Europe and Africa and takes part in cooperation mission with partners.

US military ship arriving in Lithuania