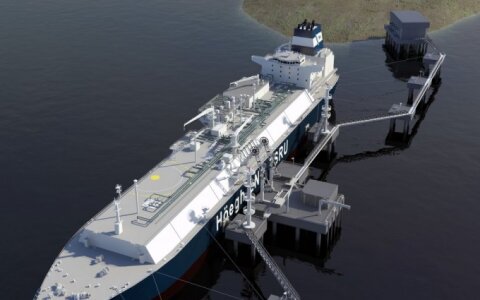 The Independence, the floating storage and regasification unit (FSRU) built for Lithuania's liquefied natural gas (LNG) terminal in Klaipėda, is currently on its way to the Persian Gulf, where it will likely be filled with natural gas.

According the vessel positions tracking website Marinetraffic.com, the Independence is currently near the Strait of Hormuz, between the Gulf of Oman and the Persian Gulf.

It has been reported that the ship may deliver a load of gas to Klaipėda for testing the LNG facility. The volume of that gas and its owner are said to be a commercial secret.

Klaipėdos Nafta (Klaipėda Oil), the developer of the LNG terminal project, has said that it will purchase 170,000 cubic meters of gas for 112.428 million litas (EUR 32.6 mln) to test the facility, which is expected to come online in early December. The company did not disclose the name of the seller.

The vessel is expected to arrive in the Lithuanian port in late October or early November.