Opinion: Lithuania’s interests in the Arctic – a new niche 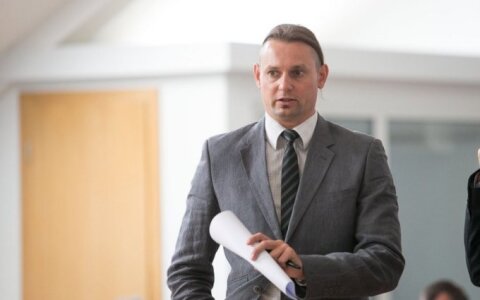 Although most of our eyes are glued to what’s happening in Ukraine (and, let’s face it, the World Cup in Brazil) for reasons apparent to everyone, the world is not limited to what Lithuania sees. The latest and most important political trends determining power, identity, rules and regional development exist way beyond Lithuania’s geopolitical boundaries.

The latest books this year reveal what’s most topical such as those by Geoff Dyer and John Mearsheimer who write about growing competition between the US and China. Then there’s John Micklethwaite and Adrian Woolridge writing about countries and the future of countries, and David Piling and Michael Reid who write about Japan’s transformation and the rise of Brazil.

The problems of the Arctic region have been on scientists’ and politicians’ radar for a number of years. Of late there hasn’t been much published on the region’s political and geo-eco problems. The Magnetic North: Notes from the Arctic Circle (2000) by Sara Wheeler and The Future History of the Arctic (2010) by Charles Emerson are worth a read.

This region has recently become more and more newsworthy for several reasons. First of all, it is believed that around one fifth the world’s oil and gas reserves lie here and which will become more accessible as global warming melts the northern ice caps. It is furthermore hoped that this will be a region rich in fish, shipping and even tourism. It’s not surprising then that the interests of countries bordering the Arctic Ocean (Denmark, United States, Canada, Norway and Russia) are starting to get in each other’s way.

It’s unresolved as to who gets what of the continental shelf in the Arctic. Already in 2007 Russia planted its flag on the underwater shelf, which could possibly belong to Denmark. Russia has also started increasing its military forces in the region. Other countries are not far behind Russia. Tension, albeit not much, remains in the North.

It’s an almost metaphysical task to look for the problems of the Arctic in Lithuania, knowing that the metaphysical can be seen as looking for a needle in a haystack in which there is no needle. Nevertheless, it’s worth taking a short look at what Lithuania’s interests in the Arctic are, how they compare to those of neighbouring countries and what political and economic potential they can open up for our country. In Lithuania, both geographically and historically, the Arctic is terra incognita. Although according to the United Nations the Baltic states belong to Northern Europe, no Lithuanian travellers or scientists have carried out expeditions or in actual fact gone there. Places where the Soviets deported people bordered on the Arctic and are now associated with distance, cold and the North Pole. There’s still some time to go before further research on the Arctic is done in Lithuania. And our media writes more often about saber rattling and ecological and energy problems in the North.

Although even China sees itself now as a “country near the Arctic”, the faraway problems of the North seem foreign under Lithuanian skies. Looking at the political parties, what their leaders say and speaking to them, the Arctic is not really mentioned. It seems only Emanuelis Zingeris at one time suggested that the Arctic problem should be made one of the priorities of Lithuania’s presidency of the EU Council.

On one hand, our partners in Scandinavia hold matters of the Arctic close to their hearts and it would be good for Lithuania to know what is important for its partners especially in the Nordic-Baltic context. What’s more, the problems of the Arctic do feature on the EU agenda and the EU is seeking to be an observer on the Arctic Council. Lithuania supports this but with little engagement because fundamentally our country’s political interests are stabilization and regional cooperation in supporting Arctic policy and restraining Russia. On the other hand, Vilnius does not support EU policy which could financially weaken EU transport policy or direct funds away from the Baltic Sea region.

Neither NATO nor smaller regional organisations such as the NB8, Northern Dimension, North Future Forum, Council of the Baltic states, e-PINE etc. have been particularly active when it comes to the Arctic. Lithuanian business or economic interests are indiscernible even with a telescope. Fishing trawlers go up to Svalbard, Norway only for symbolic fishing and there are no transport links or expeditions to the Arctic since 1990. Lithuanian scientific research or tourism hardly exists in this region.

In general it is certain that Lithuania is far from the Arctic, not only geographically but also politically, economically and ideologically. If the Northern European countries prepare an Arctic strategy even, then the other “sub-Arctic” neighbours – Estonia, Latvia and Poland are in a similar situation to Lithuania. Latvia acknowledges that it is a small country with limited resources and interests in the Arctic. Latvia, like Lithuania and Estonia prefers to discuss the problems of the Arctic multilaterally. Only Estonia stands out in terms of an active interest in scientific cooperation in the communications field because Estonia is seeking to become a competing member country of the growing European Space Agency.

Poland in turn is very much engaged in Arctic affairs because since the mid-nineteen nineties Poland has had observer-status in the Arctic Council and the Barents Euro-Arctic Council. Poland is also the only Central European country that for over fifty years has carried out expeditions and research on Spitzbergen Island. Without stressing strategic or economic interests, Poland, with its growing initiatives, is a focal point of scientific potential. Moreover, Poland sees itself as a mediator between the Arctic region and other countries.

It doesn’t look like Lithuania will become more active in policy on the Arctic. Still, within the EU Lithuania must make note that new initiatives should not weaken the country’s transport and logistics sector for which land territory is essential. Possible fossil fuel alternatives to Russian energy sources would be welcomed. Growing interdependence in the Nordic-Baltic region and Lithuania’s main foreign and security concerns, it would seem, will hold Lithuania’s attention from the point of view of the Arctic. Vilnius is interested in an “Arctic Big Five” Western partners’ agreement and a greater NATO and EU role in the Arctic. There are new niches and prospects in which to start becoming a bit active in and to join partners in new foreign policy vectors. The global Lithuanian idea requires a more global vision and action.

Dr. Mindaugas Jurkynas is a professor with the Faculty of Political Science and Diplomacy at Vytautas Magnus University.

Opinion: Lithuania’s interests in the Arctic – a new niche