Finding a summer job is not easy anymore 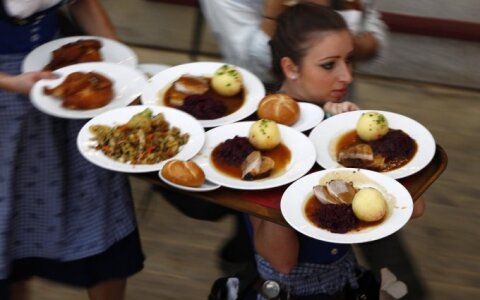 Summer is not a good time to embark on searches of a permanent job, but it usually gives a good chance to eke out some extra money by getting a temp job, which upon lucky circumstances can be turned into a full-time position, labour experts say. But this summer is quite different for seasonal job searchers.

Linas Jegelevičius for the BNN

"Before one could walk into a café in Palanga (a resort on the Baltic coast-L.J.) in mid-summer, chat a bit with its owner and be almost sure that some offer would come along the way. Not this summer. Before, there had definitely been a larger turnover of seasonal workers. This summer it seems that most of the waiters, kitchen and security staff stick with their jobs throughout it," Eleonora Dirsytė, a sophomore student at Vilnius University, told bnn.lv

This doesn’t surprise Palanga restaurant and café owners who claim that the smaller employee turnover is a result of fewer job possibilities abroad.

"Remember: EU borders have opened for Romanians and Bulgarians since the beginning of the year. So for most of the jobs that were usually up for grabs until now, the competition has increased, and not always in favor of Lithuanians," Viktoras Malinauskas, a café owner in Palanga, said.

"It’s very true: the EU labour market, even the segment of seasonal jobs, has gotten quite tighter. No surprising therefore that this summer we keep receiving calls inquiring of a seasonal job even in July. Frankly, the Exchange can offer very little, or nothing," the affiliate director noted.

The biggest chances to land a summer job are in resort towns or with farmers, Trofimovas noted.

But Palanga restaurateurs insist that starting looking for a summer job in July is just too late.

"As a rule, business-minded café and restaurant owners staff up their establishments by June. Many tend to lure waiting staff from previous years as training a new server takes time. Some of the clientele is too picky to just let anyone wait the tables," the Palanga café owner said.

As usually, the beginning of July for Labor Exchange marks the outset of deluge of high school graduates.

"But few of them hurry to look for a job right after graduation. The most wants to chill out a bit before taking on a job search in autumn. They check in with local Labour Exchange for a single reason usually: get welfare and health insurance," Trofimovas said.

And those who are sincere about job search snub temp jobs. But with luck on one’s side, a seasonal job can eventually lead to a full-time position.

«Many of the employers out there tend to hire graduates for temporary replacement of their workers who leave for holiday. But if the graduate shows off his or her best side, there’s an increasing chance the employer will offer something more serious,» the director said.

The popular belief that the right time to look for a temp summer job right before summer is wrong, he noted.

"The job seasonality begins in spring, with the nature budding. Then there is a big demand for seasonal workers in agriculture, horticulture and forestry. Foreign companies also start looking for workers during February and April mostly," Trofimovas noted.

Most of the job offers abroad until now would come from the United Kingdom, Italy, Scandinavia and Germany. But this year the demand has nearly fizzled out, mostly due to the higher competition in EU labor market.

The slumps of local economies and uncharacteristically high youth unemployment in many European countries are also to be taken into account.

"To qualify for most of the temporary summer jobs abroad would suffice to speak some English. Sure, service sector is an exception to the rule," the Labour Exchange director said.

Interestingly, Norway, for example, has recently started looking in Lithuania for a "brainy" workforce to fill up the vacancies of tour guides. This kind of job requires not only afluent English, but also a decent Norwegian and, sure,knowledge of Norwegian history, culture and politics.

"This is how I have started off in Norway," admitted Ramūnas Stulovas to bnn.lv. "Being a tour guide may sound as a dream job. But in the reality it requires a lot of talking, understanding several languages and simply a good stamina as some of the tours would begin at 6 am. So I had to be up at 4.30am. I’d often end up the end with a hoarse voice, a result of the continuous loud talking."

On the other hand, the lower numbers of available foreign jobs do not necessarily point out to the shrunk demand for new workforce.

Many of the young people do find jobs in the West on their own – through various hiring agencies and university programs. Quite many of the youth paying visits during summer to their family members abroad get helped by them.

Still, some seasonal jobs, depending on weather conditions, are still available. First, in sectors of construction and agriculture.

Another characteristic of the summer is that youth walking into Labour Exchange is often accompanied by the parents.

"I don’t see it as a sign of an excessive care, It is pretty common in Lithuania that parents help their offspring when it comes to visiting local Labour Exchange. Perhaps such a parental care could be read in a positive light: as an encouragement to take the reins of life into own hands," the director said.

But overall, he noted, the youth is lackadaisical with job search efforts mostly because of other reasons: the low pay.

"It is a common thing among employers to offer a new young worker a minimum salary. But with the economy inching to the pre-crisis level and exports growing, the employers ought to think of a higher output and therefore a higher pay for the workers. A low salary, sure, ruins a young man’s motivation," Trofimovas said.

Finding a summer job is not easy anymore