President Grybauskaitė's second term: What to expect in foreign policy? 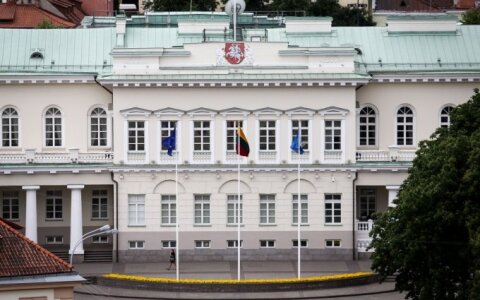 The new issue of the weekly Veidas, out on the eve of the second inauguration of President Dalia Grybauskaitė, is dedicated to the analysis of the second presidential term. What will the president be like in the next five years? What further developments could we see in her career? What changes are we facing, if any?

Foreign policy is one of the main tasks on the presidential agenda. During the first term of office, Dalia Grybauskaitė made a U-turn in this field as she shied away from any “amicable relations with the paupers”, or democracy development in the south-eastern direction, and any regional leadership ambitions Lithuania had previously had.

At the same time, the foreign policy course was turned towards Scandinavia. Was this move successful? Nobody will give a unanimous response but there were definitely many nice words said about it. It seems that during the second term we will hear as many nice words, but it is rather difficult to predict whether we are to witness any real action. Apparently, the answer is not to be sought in Vilnius but rather in the Scandinavian capitals.

The start of the first term also featured efforts of mending relations with Eastern neighbours. In this respect, President Grybauskaitė went to great lengths and visited Alexander Lukashenko, Europe’s last dictator. Unfortunately, the Belarusian leader’s flirtation with Europe was a short-lived affair as he broke his promises and once again squelched the opposition’s struggle to bring about changes, which resulted in denouncement and isolation. Lithuanian-Belarusian relations ended up right where they started, namely in stagnation.

Interestingly, the Belarusian regime is making new attempts of enticing the West. However, at this point, Grybauskaitė would hardly accept an invitation to go to Minsk so readily. It is more likely that the Lithuanian-Belarusian relations will continue to be shaped by the position of the European Union.

The first contacts that Grybauskaitė made with respect to Russia seemed promising, too. Alas, no major breakthrough was achieved in this field either and Russian-Lithuanian relations remain cool, if not antagonistic. Of course, for the major part, the reasons are linked with the Kremlin rather than the Presidential Palace at Daukantas Square.

The critics of Grybauskaitė tend to highlight the crisis in Lithuanian-Polish relations. However, considering the developments in Ukraine, increasing Russian hostility and US comeback in Europe, some positive changes may be on the cards during the second term of Grybauskaitė’s office.

Not of minor importance are personalities: Linas Linkevičius, shortly after his appointment as the Minister of Foreign Affairs, has apologised to Poland. Of course, rebuke from the Presidential Office ensued, but at the same time the minister clearly demonstrated his disposition towards the Polish line. Quite contrary to that, the ambition-driven Radoslaw Sikorski, who is often seen by Vilnius as impeding the normalisation of relations, is setting his sights on upping the game and moving to the international level, which means he might soon step down as the head of Polish diplomacy.

It is yet too soon to be talking about the return of the strategic partnership between Poland and Lithuania, but the current circumstances partly serve to corroborate the opinion of some experts, suggesting that Lithuanian geopolitical gravity towards Poland is imminent and the course towards Scandinavia is artificial, therefore a blind alley.

Will President Grybauskaitė herself admit this in her second term? This is not very likely to happen in public, but the odds are that Polish-Lithuanian relations will improve. Moreover, if President Grybauskaitė is thinking of an international career in five years’ time, it is essential that she secure the endorsement of Poland as the country is wielding an increasing influence.

President Grybauskaitė's second term: What to expect in foreign policy?