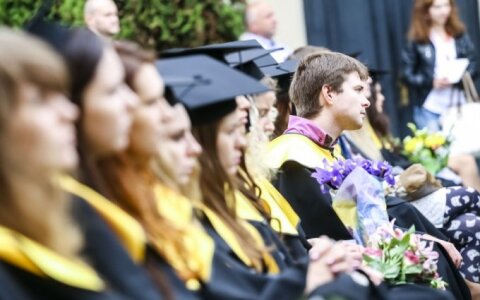 Three hundred ninety-two new students will begin their studies at the European Humanities University (EHU) this autumn. Their numbers include 329 undergraduate and 63 graduate students.

On Tuesday, 30 September, an official ceremony opening Academic Year 2014-15 will be held on campus (Valakupių str. 5) at 3 PM in Room 214. This year’s traditional opening lecture will be delivered by EHU Founding Rector Prof. Anatoli Mikhailov at 3.30 PM.

The student body is becoming more geographically diverse, with students arriving this fall from a wider range of places in Belarus, the university says in a press release.

“There appears to be a new trend: freshmen are coming not only from big cities and border regions of Belarus, but also from smaller towns in other regions,” says Maksimas Milta of EHU's Student Recruitment Office.

More than 95% of the new students are from Belarus, with the rest hailing from countries that include Russia, Ukraine, Lithuania, and Kazakhstan.

The European Humanities University is a private, non-profit liberal arts university founded in Minsk in 1992. The University has been headquartered in Vilnius, Lithuania, since it was forcibly closed by Belarusian authorities in 2004. As the only Belarusian university operating in an environment of academic freedom, it serves approximately 1,500 mostly Belarusian students, offering undergraduate and graduate degree programmes and promoting research in the humanities and social sciences.