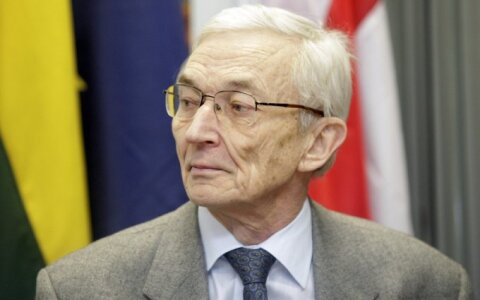 After more than two decades of service, the Founding Rector of the European Humanities University (EHU) Professor Anatoli Mikhailov has accepted the newly-created position of President of the University.

"Anatoli Mikhailov is an outstanding educator whose leadership has been crucial first to the establishment of EHU in Minsk and then to its re-establishment in exile after it was forcibly closed by the Belarusian government. I am delighted that he will now continue to be closely involved with the University in a senior advisory and teaching capacity," says Prof. Daniel Tarschys, chair of EHU's Governing Board.

Prof. Mikhailov received his PhD in philosophy at the University of Jena. He holds the rank of officer in France’s Order of Academic Palms and is a recipient of Germany’s prestigious Goethe Medal.

A respected scholar of German philosophy, Prof. Mikhailov sought to create an alternative to the system of education that Belarus inherited from the Soviet Union. Inspired by the model of a liberal arts university, Professor Mikhailov founded EHU in Minsk in 1992. Within a decade, EHU became widely-recognized as one of the best universities in Belarus.

With the remarkable support of donors in Europe and North America, Professor Mikhailov led the re-establishment of EHU in Vilnius, Lithuania, after it was shut down by Belarusian authorities in 2004.

The new appointment was made by EHU's supreme governing body, the General Assembly of Part-Owners, in conjunction with a revision of the University's statute. The appointment takes effect on 30 September.

The revised statute also provides for increased faculty and student participation in the University's governance. All faculty members with more than 27 hours of engagement per week and five elected student representatives will serve as members of an enlarged Senate.

The search for a new rector will be launched shortly. Prof. David Pollick will serve as interim rector until Prof. Mikhailov's successor takes office.

The European Humanities University is a private, non-profit liberal arts university founded in Minsk in 1992. The University has been headquartered in Vilnius, Lithuania since it was forcibly closed by Belarusian authorities in 2004. As the only Belarusian university operating in an environment of academic freedom, it serves approximately 1,500 mostly Belarusian students, offering undergraduate and graduate degree programs and promoting research in the humanities and social sciences.