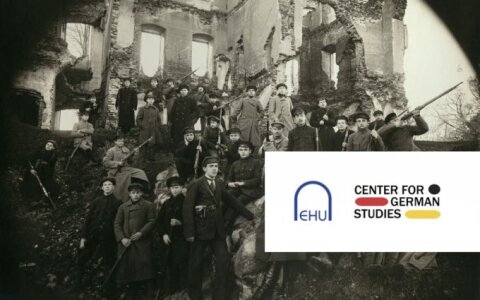 The ‘short 20th century’ — as opposed to ‘the long 19th century’ — was characterized by high levels of destruction. Wars, ideological conflicts, population mobilizations, massive displacements, and genocides lay at the heart of the emergence of modernity across the continent. These questions are addressed in a seminar series organized by Vilnius University and European Humanities University, "Violence and Social Change in Lithuania, Belarus, and Central-Eastern Europe in the 20th Century".

Throughout the century, Lithuania, like many other European societies, was a ‘shatterzone’ in which different nationalist, liberal, and socialist aspirations clashed, each claiming parts of the region and its people as part of their ‘new orders.’

The seminar series is designed to discuss the latest research on the relationship between different forms of violence and the constitution of modernity in Lithuania and a broader East European region in the 20th century. It aims to generate interdisciplinary discussion by bringing together scholars from various disciplinary and cultural backgrounds.

Our speakers will explore a variety of military, ideological, ethnic, and social conflicts and their impact on social and cultural transformation in Lithuania and other Central and Eastern European societies. We will explore the link between the dynamics of military violence, paramilitary cultures, forced migrations, genocide, social disruptions, and mobilizations.

This Wednesday, 19 November, Klaus Richter of Birmingham University will give a paper on "Displacement without Moving: Borders, Territory and Population Politics in Lithuania, 1915–1926":

The First World War fundamentally changed East Central Europe as independent states emerged from the peripheries of the former continental empires. However, independence was not secured by the November armistice of 1918, but resulted from a longer consolidation process, which included the delimitation of borders by diplomatic and military means, disengagement from the imperial infrastructure and the identification of a population supporting the state.

These policies radically changed the economic, social and cultural context of the local population, as new borders intersected traditional trade networks, free movement was restricted, land expropriated and economic sectors monopolised. The presentation argues that these policies had an alienating effect on parts of the local population which we commonly associate with displacement. Moreover, these policies drew explicitly from experiences made under German military occupation, adopting several of its practices. This will be shown on the example of case studies such as the Vilnius conflict, the annexation of the Klaipėda region, and the Lithuanian land reform.

4 February 2015 | 17.00 | Universiteto g. 7 / 329
Almira Ousmanova (Vilnius)
Ethics and Poetics of the Moment (of Death)
Natalija Arlauskaitė (Vilnius)
How to look at the Archive of Atrocities