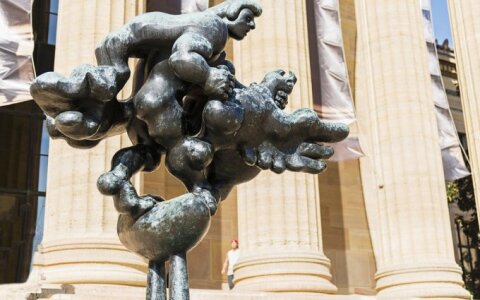 Philadelphia can lay claim to a few superlatives in art. Probably nowhere are so many paintings by Renoir and sculptures by Jacques Lipchitz on public display within less than 1 square mile but in Philadelphia. Both have a connection to France and Lipchitz life story even leads all the way to Druskininkai in Lithuania.

Actually, the largest single collection of Renoir (1841-1919), in the world, is to be found in Philadelphia’s Barnes Collection. That same Collection also houses a large collection of Litvak sculptor Jacques Lipchitz (1891–1973). In addition, just half a mile (800 m) up the road from the Barnes, the Philadelphia Museum of Art owns one of the largest collections of Lipchitz’s work. Finally, nearby the Philadelphia City Hall, the colossal 30ft (10m) high Government of the People is probably one of Jacques Lipchitz’s largest and most arresting sculptures.

Litvak sculptor Jacques Lipchitz was born Chaim Jacob Lipchitz in 1891 in Druskininkai, Lithuania (then under Russian control). At age 17, he moved to Paris that was a century ago, the art centre of the world. Initially, during his French period, most of Lipchitz work was cubist, reminding us of Picasso’s paintings of that time. It moved by the 1930s into forms that are more abstract. Lipchitz would flee the Nazis during WWII and move to New York. Yet, Philadelphia houses one of the sculptor’s largest collections outside of Israel, both at the Barnes Collection and the Philadelphia Museum of Art.

During and after the WWII Lipchitz was heavily influenced by the turbulence and suffering. He modelled a number of mythological and biblical groups that remind viewers of Baroque pathos with highly expressive gestures. Prometheus Strangling the Vulture, completed in 1953, sitting at the top of the steps to the Philadelphia Museum of Art, is certainly a fine example of these works by one of the most important sculptors of the 20th Century. Woman and Child II greets the visitors in the entrance hall, right after the ticket counter. The PMA Lipchitz’ collection grew recently thanks to a gift of five sculptures by the Jacques and Yulla Lipchitz Foundation, honouring the Museum’s 125th anniversary. That museum has now the largest collection of the Litvak artist outside Israel, and arguably some of Lipchitz’s finer works from his cubist period such as the Sailor with Guitar (1914) and Woman with Braid (1914). Moreover, the museum also has sketches and photographs of Lipchitz.

The PMA also houses a large collection of Renoir’s works. However, with 181 paintings by the French master, the Barnes Collection owns the single largest Renoir collection anywhere in the world. Renoir was a prolific painter with several thousands of paintings to his credit. Many museums display Pierre-Auguste Renoir’s lush sensual impressionist paintings, however, it is the way these paintings are displayed in the Barnes Collection that engage the visitor in a most fascinating way. The Barnes displays these paintings in a peculiar way using themes and forms. The combination of Renoir’s works arranged with other masterworks and the cubist and abstract works by Jacques Lipchitz will capture the imagination of any visitor.

Besides the extensive Renoir and Lipchitz collection, the Barns host many works of Paul Cezanne, Matisse, Picasso, and some exceptional and wonderful works by Modigliani. Albert Barnes, a rich pharmaceutical inventor-turned-art investor, established the Barnes Foundation in 1922. Barnes had a particular approach in displaying works of art in the rooms of his mansion. After a lengthy court battle, the Collection moved to its splendid present location in 2012. The Barnes Foundation maintains almost faithfully the displays in the rooms of Barnes’ house.

A short 20-minute walk from the Barnes Collection brings the visitor the centre of Philadelphia and the striking City Hall that towers over a city. Philadelphia has been an important centre, right from the birth of the USA. Lipchitz was a frequent visitor to Philadelphia during the last three decades of his life. He was commissioned to sculpt two major public works, including the Government of the people. That work looms large over the Municipal Services Building Plaza opposite City Hall. It also dwarfs over a realistic statue of former mayor Frank Rizzo. Rizzo contested during his life bitterly the Lipchitz statue and its placement in Philadelphia. Nevertheless, supporters of this powerful symbol of democracy eventually succeeded in having the work on public view. The work was unveiled in time for the US Bicentennial in 1976.

Lipchitz was twice honoured for his sculptures by the Pennsylvania Academy of the Fine Arts. In 1964, Lipchitz had an important exhibition of his work at the Philadelphia Museum of Art.
Complete list of Lipchitz work may also like to walk to the Schuylkill River or visit the Barnes’ Merion collection – located at arboretum operated by the Foundation.

The Barnes Foundation is located at 2025 Benjamin Franklin Parkway in Philadelphia. Open every day, but closed on Tuesdays. Tickets should ideally be reserved in advance for a particular time slot, on-line, as the gallery limits the number of visitors at any given time.

The Philadelphia Museum of Art, located at 2600 Benjamin Franklin Parkway is open every day from 10 to 17H, except on Mondays.