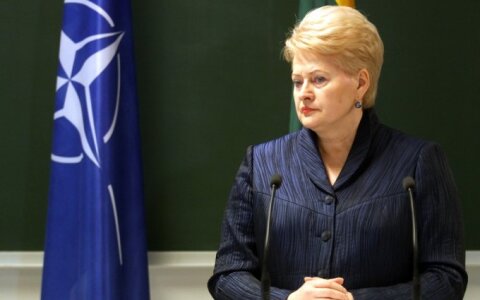 Lithuania's President Dalia Grybauskaitė met with her Latvian, Estonian and Polish counterparts in Tallinn on Tuesday, where she discussed the importance of long-term collective defence instruments and energy projects.

"Our countries have a shared goal - secure and economically strong region. We will only achieve this goal by standing together in the implementation of long-term collective defence measures and strategic projects aimed at ensuring the region's energy self-sufficiency," the Lithuanian president said in a statement circulated by her press service.

According to the press release, Grybauskaitė together with Estonian President Toomas Hendrik Ilves, Latvian President Andris Berziņs and Polish President Bronislaw Komorowski reviewed the implementation of decisions adopted at the NATO Summit in Wales as well as energy, information and cyber security issues.

Among the other issues addressed at the meeting was the increasing of energy independence. Estonia's Ilves thanked Lithuania for its contribution to enhancing energy security of the whole region. The Klaipėda liquefied natural gas terminal coming into operation in Lithuania this year will be able to cover even 90 percent of the three Baltic states' gas supply needs, if necessary, said the President's Office. President Grybauskaitė underlined that it was important to continue other strategic energy projects: complete power interconnections with Sweden and Poland, synchronize successfully the Baltic power system with European networks, improve the permeability of the existing internal gas links, and liberalize the gas market to enable Lithuania's and Estonia's access to the unique underground gas storage facility in Incukalns.

Ways to counter the dissemination of war propaganda was one of the most pressing topics of discussion at the meeting. As agreed, it is essential to seek EU financing opportunities for the alternative programmes in the Russian language, develop the European strategic communication plan and improve EU legislation governing the audiovisual sector.

Meetings of the presidents of Lithuania, Latvia and Estonia are held annually in a different Baltic state. The Polish leader was this year invited to join the event.