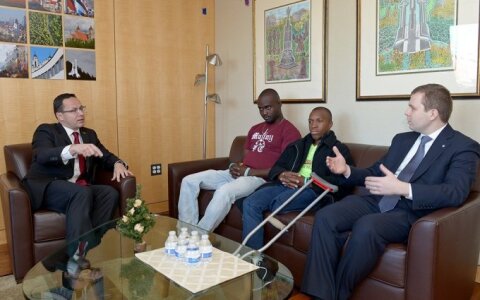 On Monday, 5 January, the Lithuanian Embassy in Washington received the visit of three young amputees, victims of the 2010 Haitian earthquake. The young man came to make a visa application for a visit to Vilnius on 8 January. The three will then travel to Rome, Italy, where they will attend a conference at the Vatican.

The three young men, Mackenson Pierre, Wilfrid Macena, and Sandy J.L. Louiseme, were welcomed to the Embassy by Ambassador Žygimantas Pavilionis and Consul Vadim Lucenko. All three applied formally for a visa to allow them entry in the EU’s Schengen area via Lithuania. Hearing their individual stories following the earthquake Ambassador Pavilionis expressed his admiration for these young men’s stories of resilience in the face of severe adversity and said: “Lithuanians certainly can relate to the struggle and the courage to succeed when facing hardship inflicted by external elements.” The ambassador expressed his hope that as a society ”we learn that we can always do more and go the extra step when we are faced with such difficult challenges.”

During a brief stopover in Vilnius, the three men will meet with Archbishop Grušas, local members of the Knights of Columbus and other Catholics in Lithuania to promote the charitable outreach and humanitarian efforts of the Order of Columbus worldwide. The three young men will also visit the Lithuanian Foreign Ministry to express their gratitude for humanitarian assistance that Lithuania provided after the earthquake disaster of January 2010. The Lithuanian assistance included two police officers provided via the UN and financial contributions from the government and a successful TV fundraiser donating money to United Nation’s UNHCR.

The Knights of Columbus sponsor the trip so that the youngsters can attend a conference in the Vatican marking the fifth anniversary of the 2010 earthquake in Haiti. All three required amputations following the devastating 7.0 earthquake that struck the island nation on 12 January 2010. The three young men received assistance related to prosthetic care from the Knights of Columbus and Project Medishare. 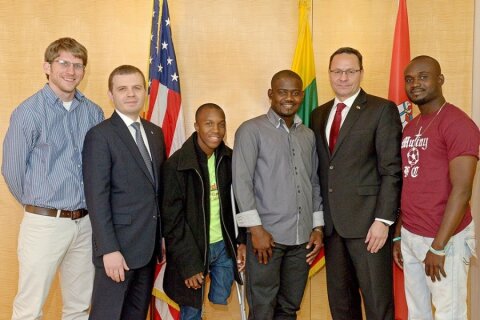 They are currently members of an amputee soccer team programme sponsored by the Knights where Sandy Louiseme is one of the top scorers on the Haitian National football team. As part of this program, they have previously travelled to the USA and visited various cities. The Knights of Columbus also made a documentary related to Haiti’s recovery titled “Unbreakable: A Story of Hope and Healing in Haiti.” The movie will be premiered at the Vatican Conference. Following the conference, the three young men will return to Haiti, via Paris.

The Knights of Columbus is a USA based Catholic organisation that is active around the world, mainly in the USA, Canada, Central America, Caribbean Islands and the North Pacific fraternal benefit society. Founded in 1882 by Father Michael J. McGivney, the Knights main activity centres around providing financial aid to members and their families, mutual aid and assistance are offered to sick, disabled and needy members and their families. The organisation’s charitable work has branched out in charitable work in areas struck by various disasters, such as Haiti after the earthquake of 2010, to restore economic security and long-term care programs. The Knights of Columbus operates through some 14,000 councils and has 1.8 million members in the countries were they have a presence. 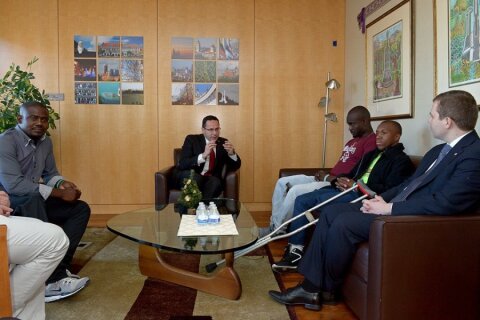