Artemy Troitsky: Belarus will be a normal European country, not so optimistic about Russia 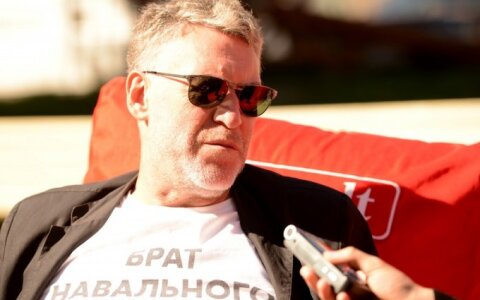 “[Belarus] will go a longer way than the Baltic states, maybe even a longer way than Ukraine (which I’m sure will also be a European country), but eventually I’m sure that Belarus will be really well. I really wish so and I don’t have any doubts about it.”

He is not so optimistic about the future of Russia:

“The only country I have large doubts about is Russia. What will happen with Russia, I have absolutely no idea. To me, it all looks like a big dark cloud.”

A renowned commentator on Russian culture, Troitsky currently lives in Tallinn and teaches at Helsinki and Tallinn Universities. The conversation, moderated by Dr. Darius Udrys, EHU Vice-Rector for Development and Communications, focused on the cultural and political worlds of today’s Russia, the roots of public support in Russia, the effects of Russia on neighbouring countries, and the stance of Russia’s cultural elite.

“I have always been optimistic about Russia, I thought that no matter how long and winding this road will be, Russia sooner or later will become a normal country, founded on normal European principles: peace, freedom, enjoying a nice life,” says Troitsky. “Instead of that, once again, Russia is proving that it is a special country. I am a new-born pessimist. It looks like Russia is a country which will never fully adapt to normal European rules.”

According to Troitsky, the best experts on Russia have not been political scientists or analysts, but, rather, artists and writers.

“In many ways, the whole thing that is going on in Russia now, even in small details, has been predicted in the novels of Vladimir Sorokin, for example, Day of the Oprichnik.”

Troitsky recalls that when Sorokin’s book was published nine years ago, it was seen as a humorous anti-utopian novel. Currently, says Troitsky, we are witnessing the book’s grotesque ideas becoming reality.

“Then, people read it and laughed. Now, it looks like a newspaper,” he quips.

Troitsky notes that the current turmoil seems to have a positive effect on culture and creativity, just as Soviet oppression gave rise to a vibrant theatre in the 1970s and the Russian rock music scene in the 1980s.

“I have a background of a rock critic and music promoter. I can tell you absolutely precisely - the most fruitful time for Russian rock music was the first half of the ‘80s. This was the time when the greatest personalities of Russian music, the greatest poets of this generation emerged. It was also the time of the biggest oppression for rock music - when the music was virtually banned. People were arrested at concerts; at least two or three big rock stars went to jail. But at the same time, it was the most inspiring time for music.”

According to Troitsky, the relatively calm and prosperous first decade of the 21st century was a lost decade for Russian culture - few worthwhile works of art and culture were created. This has changed with the current political turmoil in the country.

“I am very happy that the same rock veterans who made the singing revolution in Russia in the ‘80s - people like Shevchuk, Grebenchikov, even Makarevich - they are again at the forefront of the protest cultural movement. I am really proud of them; very happy that these guys have proven once again how strong and talented they are,” says Troitsky.

Although rock music, jeans, and other attributes of Western popular culture played a big role in the fall of the Soviet Union, the mood of most Russians has changed in the opposite direction lately.

“The influence of the West in Russia was strong but not deep, in my opinion. It started with Peter the Great and always touched a very thin layer of society. In the 18th century, the aristocracy; in the 19th century, the nobility and intelligentsia; it was always 10-15 percent of the society. Jeans are good, rock music is also cool, but in the end the Russian chanson won over rock music because it’s closer to ordinary Russians.”

Openly critical of the current regime, Troitsky sees no signs of an opposition that would not merely criticize, but also take action to change the situation. In this respect, he compares the current situation in Russia to the recent history of Belarus.

“There are very serious intellectual resources in Russia. I am fascinated by Russian political and social commentary. Great texts, a big pleasure to read. But this is where it stops. They express themselves from Russia, and, more and more often, from abroad; write something clever and good, something painful and impressive. But to do something about it? Not at all.”

Wearing a t-shirt showing support for Oleg Navalny, the currently imprisoned brother of famous Russian political activist Alexei Navalny, Troitsky admitted that, for him, Alexsei Navalny is the only person who is trying to change things in Russia.

“We need to be fair: Navalny is the only person now who is trying to do something. From house arrest. A real hero.”

As for himself, currently living abroad and regularly travelling back and forth from Estonia to Russia, Troitsky is not worried about his own security.

“I am a carefree person, generally. I’m 59 and I’ve been living through different times. I never really cared about security. So far so good. I don’t think that I am a dangerous dissident. After all, I am only talking. And writing.”

The next EHU Public Conversation will take place at the end of February and will feature EHU Associate Professor Victor Martinovich, who will share new insights from his research on Belarusian painter Marc Chagall.

The European Humanities University is a private, nonprofit liberal arts university founded in Minsk in 1992. The University has been headquartered in Vilnius, Lithuania, since it was forcibly closed by Belarusian authorities in 2004. As the only Belarusian university operating in an environment of academic freedom, it serves approximately 1,500 mostly Belarusian students, offering undergraduate and graduate degree programs and promoting research in the humanities and social sciences.

Artemy Troitsky: Belarus will be a normal European country, not so optimistic about Russia