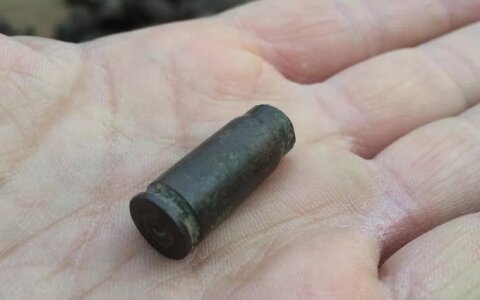 Photo from the archive of Sergey Kanovich
aA

What a silly title, I thought after I wrote it. There is no such thing in Lithuania. There was a Holocaust, but there is no museum. It should have been here twenty-five years ago, but it’s still not here. A kind of anniversary. Cynical and macabre. More cynical than the long decades when the word “Holocaust” was not to be pronounced, let alone capitalized...

Last autumn, helping to clean some forgotten graves of Lithuanian Jews, I was invited to visit a forest by the road. Like many other forests on the outskirts of the towns of Lithuania, this one, too, was marked by a black marble commemorative already partly broken marker, one of those that are used to designate the several hundred mass-killing sites of Lithuanian Jews. Who these days bothers to pay respects to those murdered if there is no microphone or carpet prepared for them? During the summer or in early fall perhaps, the site is stumbled upon by random mushroom and berry pickers; when those don’t come, some local youths that haven’t yet emigrated, get together to drink a beer or two. Even metal hunters don’t come anymore – all the metal plaques were stolen long ago.

The rest of the time, the pit where the centuries-long history of the Jews of the adjacent town is commemorated, is merely surrounded by a derelict, concrete frame built by the Soviets, lop-sided and black with age. In the middle of the pit, stands a Soviet era monument built from the same cheap and crumbly concrete. The only positive change in this place since the regaining of independence is the new inscription on the monument. The first one spoke of some nameless “Soviet people” murdered here by “fascists and their local henchmen”. Now it reads: “At this place, the Nazi occupiers and their local collaborators killed 300 local Jewish people."

I was not alone; my companions were walking a bit farther on. I looked at the inscription and tried to understand just what the number – 300 – means? What can it mean when in the village where these people lived, near these now uncared-for Jewish graves, there is not a single sign of the life of those people, not a sign of the hundreds of years of their presence here. None. And three hundred of them are buried here. I tried to imagine where and how they lived in their painted and repainted wooden houses, how they went to school, where they prayed, and how all of them were killed in one day. The world created by them and their ancestors was gone in one day. I tried to see their faces, their women and old men, their children playing in the streets we had just passed. No matter how I tried – there was no way I could combine the people in my imagination and the reality where all traces had disappeared, a reality with no room for them.

‘Sergey,’ I heard. I turned around and saw my friend.

‘Look what I found,’ he extended his hand.

I leaned over the palm of his hand, because I did not immediately understand what kind of tiny, round earthy object lay there. I took off my gloves and carefully took it, so I could get a better look. I wiped off the dirt and what I saw left me stupefied. It was a bullet shell. I was holding death. And memory. They both, apparently, are inseparable from the existence of Lithuanian Jews.

I believe I understand why Lithuania still doesn’t have a Holocaust museum. I assume I know why there are people who want to literally turn one of these pits in Ponar into such a place, and fend off criticism by announcing – “Look, we have built a museum for YOU, what else do you want?” In fact, what more could we want if they built such a museum in a place where once a year microphones are turned on and photographs taken. On second thought, it’s not even a museum; it’s a cemetery for those who were murdered in a mass grave. It is a place one barely visits. This may be the most tragic of all pits – because it is a mass grave of tens of thousands murdered people. But they weren’t the only victims. Almost all Lithuanian Jews were killed, and the massacres took place everywhere – in all of Lithuania. And those people deserve their memory to be honoured, just as the memory of those murdered or extradited far from their homeland. After all, we’re not going to move the Lithuanian Museum of Genocide Victims from the capital to, say, Rainiai.

We should once and for all admit that the story of the life and death of Lithuanian Jewry has fallen victim to political games and the memory war. It’s a handy tool for history manipulators. Those games must end. If not out of respect to the victims, then out of respect for the living ones. We should once and for all stop the Holocaust of memory, when one tragedy has all the attention and funds, and the other is kept far from the city, the textbooks and, finally, from the public historical memory.

In the last twenty-five years, the bullet shell would likely find a place only in a local museum, a museum that no one ever visits. The Museum of Genocide Victims would hardly find room for it. That museum has been dedicated to another crime – its plan was to preserve only the memory of the genocide of ethnic Lithuanians.

Is this shell what the person, whose life was ended by that bullet, deserves? Is this what those three hundred people lying in the pit deserve? Is this what the two hundred thousand people lying buried in Lithuanian soil deserve? Finally, do we deserve to live in such a poor memory? Why do we allow its destruction? Why are we afraid to resist? Why do we still think that again the Jews, as in Soviet times, are the last in line? After all, does this really only concern the Jews? How do we appear to those to whom we constantly explain that here in Lithuania the most terrible crime in its history took place?

If I thought that this is just a Jewish problem, I would not have bothered you. It is the duty of everyone – to remember.

I’ll find a place for this bullet shell. A temporary one. Until we find room for it in our memory.

If you try to contradict me by using the arguments of the Holocaust education program, piles of monographs of all kinds, the Jewish Disneyland, a new design for the Paneriai memorial, etc., please don’t bother. Instead, go to the nearest pit, collect the garbage, get your hands frozen and shoes dirty – memory is clean only in official celebrations – and then you may have a conversation with the bullet shell you might find there. It was meant to kill a person and we still allow the killing of memory.

It is very simple to find a building for a Holocaust museum in the capital, which we call the Jerusalem of the North each time we need to commemorate some famous Litvak. The problem is that it has taken over a quarter of a century to realize that it needs to be done. Maybe it’s enough?