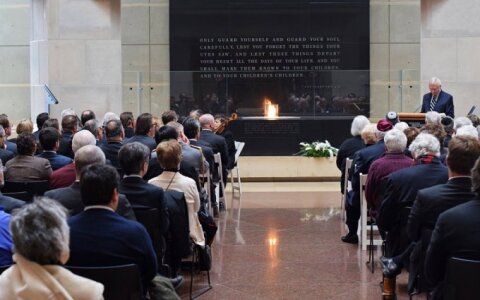 On Tuesday, an International Holocaust Remembrance Day ceremony took place in the United States Holocaust Memorial Museum in Washington DC. The International Holocaust Remembrance Day coincided this year with the 70th Anniversary of the Liberation of Auschwitz-Birkenau. The Lithuanian Ambassador to the USA, Žygimantas Pavilionis, attended the solemn remembrance service. The Museum’s senior advisor, Arthur Berger, welcomed the gathering, that included a number of holocaust survivors and a large number of diplomats.

After a brief welcome in the Hall of Remembrance, Mr. Berger introduced Mr. Steven Fenves, the keynote speaker and a Holocaust survivor. Mr. Fenves told how his childhood in Hungary turned into a nightmare when he and his family were picked-up by the Nazis and transported to Auschwitz. After his separation from his parents, his strong survival instinct, language skills, and resilience allowed him to make it through a living hell. After the liberation, he settled in the US and raised a family with four children. He also spoke out on the dangerous situation in Europe today. Mr. Fenves described it as “a situation that reminds him more of the 1930s than the 1990s.”

After Mr. Fenves speech, a string quartet played the Hymn of the Partisans. Mr. Manny Mandel recited the Holocaust Kaddish followed by Mr. Berger reading a selection of names of victims that died during the Holocaust. A touching performance followed with the haunting ‘Ani Ma’amin’, initially played on cello by Holocaust survivor Jacqueline Mendels Birn. With the string quartet joining in, the ambassadors, accompanied by Holocaust survivors, lit a candle in front of the names of the concentration and extermination camps. Ambassador Pavilionis lit a candle in front of the Ponary (Paneriai – southwest of Vilnius) and Ninth Fort (Devintas Fortas – north of Kaunas) remembrance shrine.

Deputy Assistant Secretary in the Bureau of European and Eurasian Affairs at the US State Department, Eric Rubin, attended the remembrance ceremony and spoke afterwards. Mr. Rubin worked with Paul Goble in Lithuania in the days immediately after independence. Mr. Rubin was recently in Vilnius where he had met also with Professor Vytautas Landsbergis. Eric Rubin expressed his concerns that the past is never far away and worries that that present situation with Russia creates again serious challenges to preserve democracy and rule-of-law, particularly for the next generation.

Earlier in the day, President Obama issued a statement paying tribute to the six million Jews and millions of others murdered by the Nazi regime. Vice President Joe Biden quoted Tom Lantos, a Holocaust survivor and former member of the US Congress who said, “The veneer of civilization is paper thin. We are its guardians. We can never rest.” Mr. Biden said, ”It must be more than a lament. It must remain our commitment.”