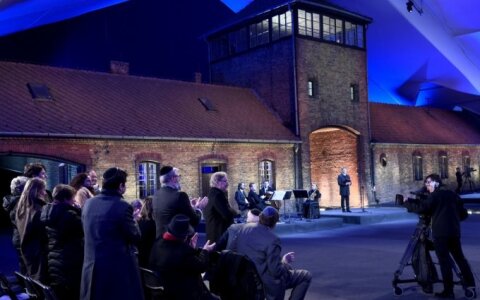 On 27 January 2015, Linas Linkevičius, Minister of Foreign Affairs of Lithuania, together with the delegation led by the President of Lithuania Dalia Grybauskaitė attended the ceremony to mark the 70th anniversary of the camp’s liberation in Auschwitz, Poland.

“As we mark one of the greatest tragedies in human history – the Holocaust – we share our common pain with the survivors of this nightmare. By witnessing this painful historical legacy we reiterate that there is no and there will never be any place for anti-Semitism, xenophobia and other forms of hatred in Lithuania” said the Minister.

According to Linkevičius, the memorial ceremony in Auschwitz makes us halt and reconsider humanity, lessons of history, aggression and the manifestations of evil which we face in the modern world.

“Those who had survived this hell testify that being indifferent and silent in the face of evil may mean taking the side of the evil”, the Minister added.

Heads of states and representatives of international organisations took part in the remembrance ceremony held in Auschwitz in memory of the victims of the Holocaust.

Bronisław Komorowski, the President of the Republic of Poland, delivered an address to open the ceremony, prayers were said. The Auschwitz survivors were in the center of attention at the remembrance ceremony, they lit candles at the Death Wall together with the heads of delegations.