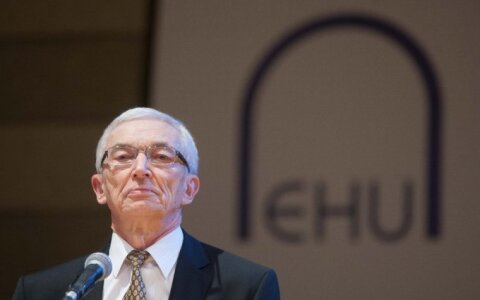 Members of the Belarusian opposition have turned to Lithuanian politicians for help over leadership of the European Humanities University (EHU) which is operating in Vilnius, saying it is transforming the exiled university into Russia's fifth column, the Lietuvos Žinios daily reports.

Meanwhile, the university's president says this is how the Belarusian opposition disguises its own inactivity.

"EHU is Europe's only university operating in exile, assisted and supported by Lithuania, and it should not turn into a pro-Russian fifth column. Today, the university's community is electing a new president, but is no longer able to pick a person who would bring EHU back on track – a Belarusian in the European context," Belarus' ex-president Stanislav Shushkevich, currently an opposition figure, said in an open letter.

Related articles
Artemy Troitsky: Belarus will be a normal European country, not so optimistic about Russia
Anatoli Mikhailov appointed president of EHU

He maintains that the university's new president Anatoly Mikhailov, formerly a rector, has gained grounds in the authoritarian top management of the university, therefore, the candidates for rector will only be puppets elected in non-transparent elections. EHU president Mikhailov, in his turn, leveled criticism at the Belarusian opposition as a disunited, impotent and incapable of submitting rational proposals on reforms.

Fears similar to those of Shushkevich have been voiced by nearly 50 Belarusian science, arts and public figures amid the continued crisis at EHU caused by what they claim is destruction of the university's self-governance body and creation of a closed authoritarian administrative system.

A competition for a new rector was called last fall. The new person should replace Mikhailov, who was one of EHU founders and has been the rector for the past 22 years. Although running for the election, Mikhailov can be calm about his situation – he was appointed EHU president in October 2014.