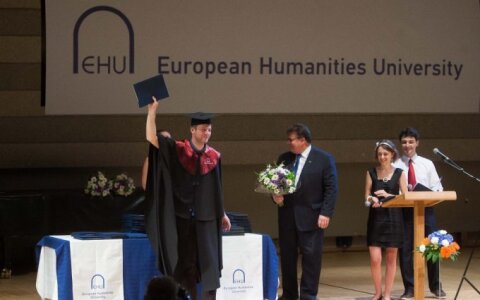 On 30 January, at a meeting in Vilnius, Lithuanian Minister of Foreign Affairs Linas Linkevičius urged representatives of all governing bodies of the European Humanities University (EHU) to unite for a common goal, ensure smooth operations of the university, and meet its commitments to the students, the Belarusian society and international donor community, Lithuania's MFA said.

The meeting follows public criticism expressed by some members of the Belarusian opposition dowards the university's management.

The minister met with Anatoli Mikhailov, president of the EHU, Garry David Pollick, interim rector, Daniel Tarschys, chairman of the Governing Board, Danu Davidson, chairman of the Search Committee, Ryhor Miniank, chair of the Senate, Dzianis Kuchynski, president of the EHU Students' Union, Maksim Milta, representative of EHU Alumni, EHU vice-rectors and members of the Governing Board.

During the conversation Linkevičius noted that the 10th anniversary since the EHU settled in Vilnius is a wonderful opportunity to review what has been done and take a new look at the EHU. Moreover, EHU students and alumni called in the beginning of January for a broad debate on strengthening and the future of the university.

Linkevičius highlighted that international community sees the EHU as a democratic project and it requires the university to carry out all the processes in a transparent and democratic manner. Therefore the search for rector is extremely important in this context.

The minister noted that the current search for rector attracted a great deal of attention in Belarus, Lithuania and other countries and reminded that the role of the newly elected rector is highly meaningful for the university, Belarusian society and international community.

During the meeting, Linkevičius expressed his hope that the best candidate will be selected as the leader of the European Humanities University and trust of all stakeholders will be restored via a transparent and democratic process. The minister reassured that Lithuania will continue to provide comprehensive support to EHU activities and engage in close cooperation with representatives of EHU governing bodies and international donors.

EHU became a university-in-exile in 2005, when it was opened in Lithuania after its operations were shut down in Belarus in 2004. This university is still unwelcome in Belarus.