Back from Afghanistan: Roundtable on veterans’ experiences 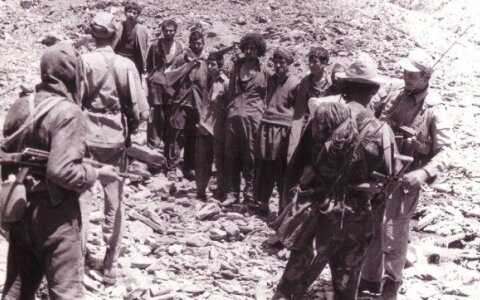 Scholars will discuss the consequences of the Soviet-Afghan War of 1979–1989 from a transnational perspective, especially in terms of strategies for (re)integrating veterans during a two-day workshop at the European Humanities University. On February 12 at 5 PM they present their research in a round table at Vilnius University´s History Faculty.

Scholars from Germany, Switzerland, Ukraine, the United Kingdom, and Vilnius will focus on the experiences of veterans from military conflicts in Afghanistan, Tajikistan, Ukraine, Belarus, Russia, Lithuania, and Germany. The workshop is organized by the EHU Center for German Studies with support by German Academic Exchange Service.

Participants will consider how state and society addressed the consequences of the Soviet-Afghan War and the withdrawal of international armed forces from Afghanistan 25 years later. The aim is to analyze strategies for (re)integrating veterans of an asymmetric war into society, media, and the legal order in a radically changing international context. Beyond a normative concept of successful (re)integration, the papers will address the many contradictions between the soldiers’ self-perception, their post-war experience, and the contradictions veterans have faced in new social settings.

The workshop is based on the assumption that there is no direct link between individual trauma during an asymmetrical war and the social concepts for overcoming the trauma in the war’s aftermath. However, the asymmetric nature of conflicts like the Soviet-Afghan War and the unwillingness of Soviet officials to address the violent character of the Soviet invasion has had a long-term impact on the veterans, and this impact resurfaced in the newly emerging post-Soviet societies. Participants will consider the question of how various social protagonists and the former combatants themselves deal with their experiences from the Soviet-Afghan War in very different post-war settings.

In this context, the different social and political strategies, oscillating between disappearance and presence, will be compared to the veterans’ own perspectives. One presenter will discuss possible parallels to today’s withdrawal from Afghanistan.

Back from Afghanistan: Roundtable on veterans’ experiences