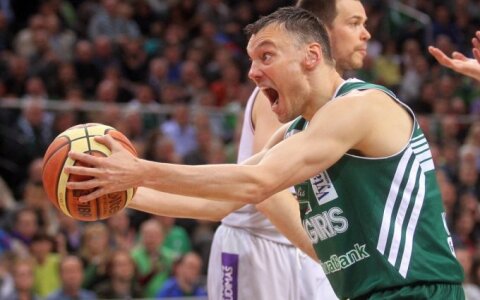 Lithuanian legendary basketball player, Šarūnas Jasikevičius, who retired at the end of last season, will be formally crowned a Euroleague basketball legend this Thursday.

Jasikevičius (Šaras), who won four Euroleague titles during his career, got hot compliments from his former coaches and teammates. Pini Gershon, who coached the Lithuanian in Maccabi Tel Aviv and won two titles in a row, said about Šaras that he was "crazy but great - one of the greatest. He always takes the ball and tries to win games."

Nikola Vujčič, who used to be his teammate in the Israeli club, said that the Lithuanian “was the glue" of Maccabi and that he was a “special winner”, and the legendary coach Z'lico Obradovic described Jasikevičius as a "coach on the field".

Jasikevičius, will receive the honorary title from the Euroleague during Žalgiris Kaunas's game against Real Madrid. Šaras, who is working today as a coach’s assistant in Žalgiris, is described by the Euroleague as one of the most exciting basketball stars of the 21st century.

Šaras retired after a long and successful career of 16 years. He won the Euroleague title four times and is the only player who won the title in three different clubs (Barcelona, Maccabi Tel Aviv and Panathinaikos).

After several years in the NBA, the Lithuanian came back to Europe and in 2009 won with the Greek club Panathinaikos his forth Euroleague title.