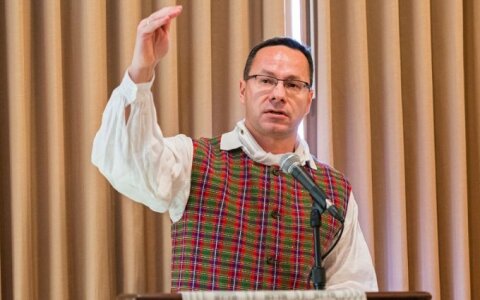 Lithuanians of the US Capital region celebrated on Sunday, 15 February, the 97th anniversary of Lithuania as the modern day State, on one of the most blistery, cold days in recent memory. The day’s celebration started with a Latin mass in St. Matthews Cathedral. Monsignor Rolandas Makrickas of the Apostolic Nunciature to the United States welcomed the congregation the historic downtown cathedral. At the end of the service, Deanne Howes sang the Lithuanian national anthem, joined by well over 150 Lithuanians. The attendees walked the short distance on icy sidewalks to a nearby hotel for a breakfast. Washington Lithuanian Community leader, Danelė Vidutienė, introduced Žygimantas Pavilionis, Lithuania’s Ambassador to the United States. The Ambassador gave a brief overview of his tenure in the US Capital.

Ambassador Pavilionis started with thanking the community for their efforts in restoring Lithuanian statehood and their unwavering commitment to keep the Embassy open during its more than 90 years of uninterrupted existence in Washington. He reflected on the mood of US relations vis-à-vis Russia in the US Capital upon his arrival five years ago, describing them as “uneventful ‘reset’ quiet.” The last 12 months could not be more different. The Ambassador said, “Lithuania is increasingly consulted by all levels of the US government.” There are progressively more contacts with members of Congress, the visit of the US Vice President, and recent meetings between the US President Obama and President Dalia Grybauskaitė. He added, “For the first time in our history, we now have NATO and US troops stationed in Lithuania.” The Ambassador also underscored the importance of US companies as premier investors and job creators in Lithuania.

Mr. Michael Sawkiw of the Ukrainian Congress Committee of America gave a fiery speech reflecting on the close Lithuanian-Ukrainian ties. He also urged the Lithuanian community to pressuring members of Congress and the White House to assist Ukraine in their daily struggle against the Russian aggressor.

After a number of song and dance performances by students of the K. Donelaitis Lithuanian School in Washington, Ms. Vidutienė introduced the main speaker, Mr. Marius Kasniūnas, Chair of the Lithuanian Foundation (Lietuviu Fondo Tarybos Pirmininkas).

Several large-scale events remembering Lithuania’s Independence will take place in the US Capital over the next weeks. Minister of Foreign Affairs, Linas Linkevičius, Minister of Energy, Rokas Masiulis and Professor Vytautas Landsbergis will attend a prestigious event in the Library of Congress on 25 February.