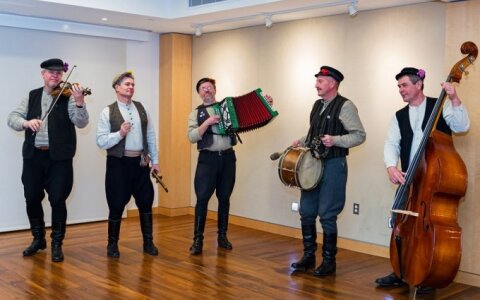 On Tuesday, 17 February, the Embassy of Lithuania in Washington took on a bit of pagan festive charm, celebrating Užgavėnės (Shrove Tuesday) with an evening of music and typical food. The evening was organised by the Lithuanian Community of Washington. A surprising large crowd gathered as the US Capital appeared almost completely shut down after some heavy snowfall overnight.

Užgavėnės has a long pagan tradition, as in Lithuania and many other European countries, this is traditional a day to chase the long winter away with bonfires being lit in many places. On the eve before the start of lent many countries also celebrate Mardi Gras and in the Lithuanian Embassy it centred on some good cheer and some traditional Užgavėnės food. Pancakes and ‘spurgos’ (doughnuts) were served at the beginning of an evening with some very traditional entertainment.

After a brief introduction by Community leader, Danelė Vidutienė it was Lithuanian Ambassador to the USA, Žygimantas Pavilionis, that welcomed the gathering. Thereafter, the Reverend Gintaras Jonikas, a Lithuanian priest from Detroit, MI addressed the audience. He spoke about his work as a Lithuanian priest in what was once the motor capital of the USA. Father Jonikas is a third generation Lithuanian, whose grandfather was based in Chicago. His grandfather had returned to Lithuania and had been arrested by the Soviet occupier. Father Jonikas’ grandfather was subsequently interned and killed in Siberia. He concluded his remarks with leading the audience into a rousing Lithuanian National anthem. He then introduced Šeduvos Bernai (The Boys from Šeduva), the evenings main attraction.

Šeduvos Bernai on tour through several American cities told the audience that they barely noticed being in the USA as they met so many Lithuanians. Their folk music did strike a happy note with many as they engaged in some fine communication with the audience. Their music sounded happy and cheerful and got the audience interacting while some of the youngsters were dancing to the tune of some of the finest Lithuanian folk music.

Seduvos Bernai performing on Shrove Tuesday at the Lithuanian Embassy from Ludo Segers on Vimeo.