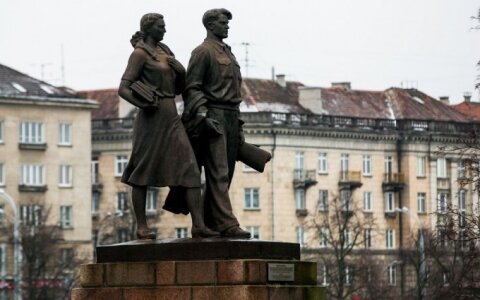 Lithuanian Prime Minister Algirdas Butkevičius said on Wednesday that a proposal to hold a referendum for Vilnius residents to decide on the fate of the Soviet Green Bridge statues was a "good idea".

"I believe it's a good idea and we shouldn't be afraid of it. It’s very popular to hold referenda in Switzerland, and I think it's one of the ways to promote community spirit and citizenship. Let the society take an active part, and I think it would be another step towards building the government's closer dialogue with the public," the prime minister told journalists on Wednesday.

The idea to hold a "mini referendum" on the Green Bridge statues has been proposed by Social Democratic Speaker of the Seimas Gediminas Kirkilas.

Lithuanian politicians and cultural heritage specialists disagree on whether the statues on the Green Bridge in central Vilnius are part of the Soviet propaganda and must be removed or must stay due to their cultural value.

Last week, a panel of the Cultural Heritage Department decided not to remove the Green Bridge statues from the list of protected monuments.

The move practically blocked the Vilnius authorities' plans to remove the statues.

The four groups of statues, representing Soviet soldiers, workers, peasants and students, have stood on the bridge since 1952.

Critics say they are part of Soviet propaganda and an eyesore for people who fought against the Soviet occupation. The other side claims that by keeping the sculptures Lithuania will show it has dealt with ghosts of the past.