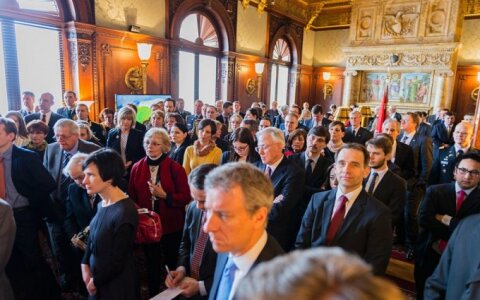 On Wednesday, the prestigious Library of Congress in Washington DC turned out to be the perfect backdrop to start the 25th anniversary celebrations of the reinstatement of Lithuania’s independence on 11 March 1990. Close to 200 dignitaries turned up, including Professor Vytautas Landsbergis, Linas Linkevičius, the Lithuanian Minister of Foreign Affairs, Rokas Masiulis, the Minister of Energy, and Congressman Michael Turner of Ohio. Among the dignitaries were also the Deputy Speaker of the Ukrainian Parliament Andriy Parubiy and the former Georgian President, Mikheil Saakashvili.

Lithuanian Ambassador to the USA, Žygimantas Pavilionis, introduced the speakers, referring to the former head of State, Vytautas Landsbergis, and Minister Linkevičius as the strategists that pulled Lithuania free of the Soviet oppression and that set the course for the country to join the EU and NATO within 15 years.

Professor Landsbergis became the first head of state of Lithuania in 1990. He was the president of the Seimas (Lithuanian Parliament) during those dramatic March days in 1990. Professor Landsbergis reminded the audience in his speech of the continued struggle for democracy and independence. He quoted the wise words from Ronald Reagan: "Freedom is never more than one generation away from extinction." He also expressed the fear that Putin’s aggression and ‘hybrid warfare’ that is being waged against Ukraine do not only represent a danger for Ukraine and Eastern Europe but ultimately for the United States. He wondered why people still keep on referring to Russian military and local thugs as pro-Russian separatists in Easter Ukraine, whilst everybody knows their true nature.

Minister Linkevičius emphasised the important strategic partnership between the United States and Lithuania. He called for unrelenting solidarity with the Ukrainian people in their struggle to remain whole and free. Minister Linkevičius asked for the US to keep up the lead against Putin’s expansionists plan on the European continent.

Ambassador Žygimantas Pavilionis then introduced the representatives of the present day ‘Bloodlands’: the Deputy Speaker of the Ukrainian Parliament and one of the Maidan leader, Andriy Parubiy and the former Georgian President, Mikheil Saakashvili. Deputy Speaker Parubiv spoke with strong words about daily struggles and non-respect of agreements that Ukraine faces against Putin’s forces. Former Georgian President, Mikheil Saakashvili spoke about the many challenges that he sees first hand as Chair of the International Advisory Council on Reforms, appointed by Ukrainian President Poroshenko.

The guest were also able to visit the private reading room of the Congressmen and Senators in the Library of Congress where they could see a display with more than 40 books about various aspects of Lithuania regaining independence in 1990.

In the evening, the Lithuanian Embassy hosted Professor Landsbergis who presented his wife’s movie about the events leading up to and the regaining of independence for Lithuania.