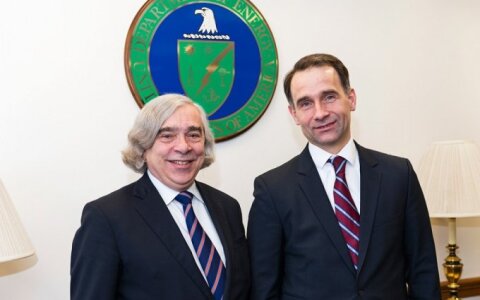 Lithuania's Energy Minister Rokas Masiulis, who returned from his visit to the United States, says the Liquefied Natural Gas (LNG) Terminal as well as Lithuania's strong stance on energy security has opened many doors.

In the US, Lithuania is seen as a country that can implement large energy projects and enhance its own as well as regional energy security. Masiulis says US politicians and businesspeople value this highly.

In his meetings with US politicians and businesspeople, Masiulis urged not to limit LNG export as it would take away from Russia its main weapon - blackmail using energy resources. In addition, he says it is important to lift restrictions on oil export.

"Gas is being discredited in Europe as a product because of Gazprom's (Russian gas company - ELTA) activities. Gas, which is a good energy resource, is viewed with mistrust because it is instantly associated with Russia's aggressive actions. US companies can change this," Masiulis said at the meetings.

Lithuania is presented in the US as a part of a regional market. Gas can already be sold through Klaipėda LNG terminal to customers in Latvia and Estonia. The market will further expand once gas pipelines from Lithuania to Poland and from Estonia to Finland are completed. Lithuania is seeking to become independent of Russia's gas.

According to Masiulis, some countries are asked what they have done in order to guarantee their energy security, whereas he was not asked this in the US. On the contrary, Lithuania was commended on its resolve to ensure alternative energy supply sources.

The minister says the geopolitical situation in Europe prompts US politicians to devote greater attention to energy security. At the same time, because of increased gas supply, US energy companies have become more flexible and are actively looking for new markets. "Such circumstances are very favourable for Lithuania," the minister emphasised.

Shale gas extraction in the US led to considerable increase of gas supply. As a result, energy companies have become more flexible compared to several years ago. For example, in the past US energy companies interested in LNG export were seeking for long-term contracts and large quantities of gas. Now they are looking into small markets as well, including Lithuania.

During his one week visit to the US Lithuania's energy minister met with US Secretary of Energy Ernest Moniz, representatives of more than ten US energy companies such as Exxon Mobil, Exelon, ConocoPhillips, Cheniere as well as analysts and scientists from Harvard and Houston universities. Contracts on LNG import were signed with two US companies.

As reported, on 27 February Lithuania's natural gas supply and trading company LITGAS signed a master trade agreement to enable purchases of LNG from Cheniere Marketing, a subsidiary of Cheniere Energy. Cheniere Energy will open the first LNG export terminal in the US in over 40 years later this year, first LNG expected to arrive in Lithuania as early as 2016.

On 26 February LITGAS signed a memorandum of understanding with Delfin LNG LLC - a company implementing the first offshore floating liquefaction project in the US.