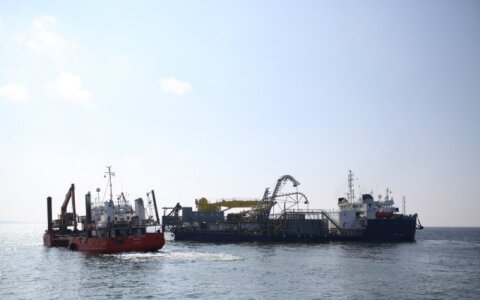 Russian ships are consistently interfering with a strategic energy project of Lithuania that is laying down an electricity link under the Baltic Sea to connect its grid with Sweden's.

Sources have told DELFI that Russian ships have appeared for the fourth time this month on the site of the cable laying works in the Baltic Sea.

The Lithuania side received a notice from the Russian ships on Thursday with instructions to move out of the cable laying zone until 6 PM. The Russians said the place was chosen as a site for military exercise.

Lithuanian Foreign Minister Linas Linkevičius confirmed this. He said Lithuania had sent three protest letters to Moscow since March over similar actions. No response was received.

"This is completely unacceptable and in violation of the United Nations Law of the Sea Convention," the minister said to DELFI.

Linkevičius also told the BNS news agency that he will summon the Russian ambassador to Lithuania over the incident.

The NordBalt link project, worth EUR 550.3m, is managed by Litgrid, Lithuania's state-owned electricity company. The aim of the project is to connect the country's electricity grid to Scandinavia.

The cable between Lithuania and Sweden is scheduled to be put into operation by the end of this year. The 450-kilometre underwater connection will have a capacity of 700MW.