Survivor of Nazi and Soviet repressions: I fear again when I see fascination with cruelty 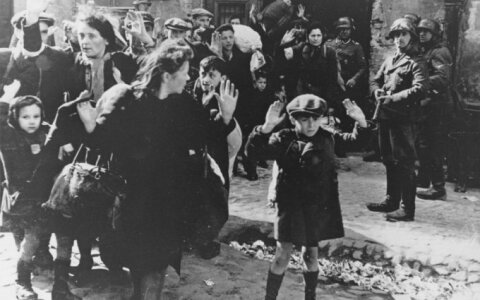 Juliana Zarchi, the daughter of a German mother and a Jewish father, who survived Nazi and Soviet repressions in Lithuania, says her fears are rekindled again as she sees re-emerging fascination with cruelty, despite horrible lessons of the twentieth century.

"Some two or three years ago, it seemed that they all were horrible things of the twentieth century and were gone now. That they were in the past. But the Islamic State and its respect for cruelty, and those young people are fascinated with it. Cruelty is respected once again and is re-emerging. In Europe as well, where far-right movements are growing, expressing hatred for others. Or in the case of the Maidan. When it started, it seemed that nothing will be the way it turned out to be. And once again I get that unpleasant feeling of fear. I start thinking if that big country started making demands, how I would have to flee to Germany as soon as possible," Zarchi told BNS.

As Europe marks the 70th anniversary of the end of World War Two, the woman, who now lives in Kaunas, shared her memories with BNS about Nazi and Soviet repressions she survived.

During the years of the Nazi German occupation, she managed to escape the fate of more than 90 percent of Lithuanian Jews who were killed by the Nazis, often assisted by local collaborators. At the age of three, she was saved from the Kaunas Ghetto and hidden by her German mother and grandmother.

After Lithuania was re-occupied by the Soviet Union at the end of the war, she was deported to Tajikistan because of her German descent.

Her mother last saw her father in 1941 after the war broke out. He went to the editorial office where he then worked to find out about the start of war. He called her from there and said the frontline was moving fast and so he was to the east with the whole editorial office.

According to Zarchi, fleeing from the Nazis, her father probably thought that a single German woman with a blonde daughter would not raise suspicion, so he left them. But he never got to the Soviet Union. After returning to Kaunas, his colleagues said he had gone to Ukmergė where he had family.

Zarchi learnt from documents she found later that her father and all of his family in Ukmergė had been killed by the Nazis.

After the Nazis entered Lithuania in 1941, Zarchi was sent to a ghetto as a half-Jew, spending several moths there at the age of around three. She was saved by the family of neighbour Pranas Vocelka.

"I know I had a coat and stars had to be on the front and back of it. They changed my clothes and removed the stars, as there was a tear on the coat," Zarchi said.

She and her mother were deported to Tajikistan as Germans in April 1945 after the Soviet army re-entered Lithuania.

"I was six and remember everything very well. I remember how kids used to throw stones at me, because I suddenly became a Fascist. I thought 'Why should I, who was recently saved from a ghetto, be a Fascist and take responsibility for Nazi crimes?' But that's the Soviet Union and its policy. They did not recognize the Holocaust," Zarchi said.

Having studied German at a university, Zarchi is now a member of the Jewish Community of Lithuania and helps with interpreting. She has recently achieved recognition for her saver Vocelka as a Righteous Among the Nations.

Survivor of Nazi and Soviet repressions: I fear again when I see fascination with cruelty