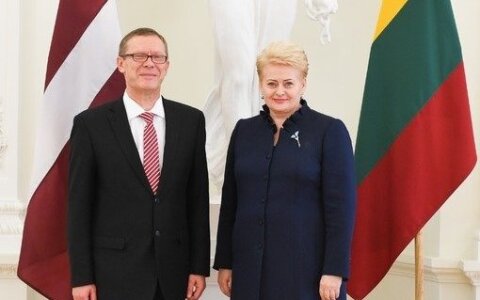 According to the President, Latvia is one of the closest partners of Lithuania. Economic ties of the two countries are very close, but at the moment the most important cooperation is in the sphere of security. The President pointed out that a common position of Lithuania and Latvia was important in order to strengthen joint defense capacities and smoothly implement the decisions taken at the Wales summit.

This month, President Dalia Grybauskaitė together with Latvian President Raimonds Vējonis attended the inauguration ceremony of the NATO Strategic Communications Center of Excellence (StratCom COE) in Riga. The President once again congratulated Latvia and noted that this center would help to ensure information security and would contribute to the fight against hostile propaganda. The President drew attention to the need to further strengthen energy and cyber security of all three Baltic countries as well as enhance prospects for strategic communication.

The meeting addressed topical issues relating to joint energy projects. According to the President, Lithuania expects strong cooperation aimed at strengthening regional energy markets. The creation of a gas market in the region and the diversification of electricity supply through strategic interconnections between the Baltic countries and Europe are priorities in this area.

Speaking about the joint European-gauge railway project Rail Baltica, the President noted that Lithuania and Latvia had to cooperate more closely in order to make better use of EU funds allocated for this project.

Einars Semanis holds a master’s degree in political sciences and a doctoral degree in philosophical sciences. He was engaged in academic activities. The Ambassador started his diplomatic career in 1993. Einars Semanis served as adviser at the Latvian Embassy in Washington. Earlier the diplomat was ambassador to Poland, Finland and China. Before his appointment as ambassador to Lithuania, he was Director General of the Bilateral Relations Directorate at the Ministry of Foreign Affairs of Latvia.