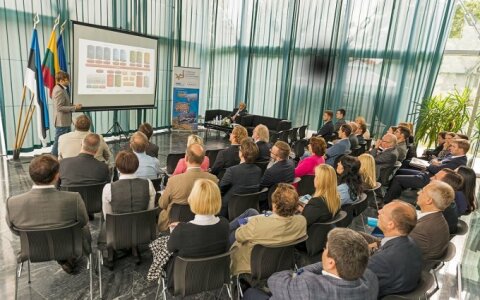 On Wednesday afternoon, the Estonian Chamber of Commerce in Lithuania invited Ott Vatter of the Estonian e-Residency for their season's opening event in the Estonian Embassy in Vilnius.

Ambassador Toomas Kukk welcomed the members of the Estonian Chamber to the Embassy, a building like the country it represents, with a contemporary feel and look. A fitting environment for expert Ott Vatter to sketch the history, benefits and goals of the whole project. The idea of a borderless world that e-Residency contributes to, clearly got the interest of the audience.

Estonia, like the other Baltic states, found the need to quickly move on from the Soviet legacy and embarked on establishing itself as an Internet powerhouse. Although the country has only 1.3 million residents, it became known for such cyber revolutionary contributions like Skype, now part of Microsoft. In the process it created also the backbone of the e-Residency, whilst building a global reputation for e-security succeeding in hosting a NATO centre of excellence on the way.

With the e-Residency card, everybody, wherever they are based, can be issued a digital identity that allows them to run a company and do e-business. Perhaps more than attracting additional inward investment, it is certainly exceeding in projecting a very contemporary, business-friendly image that few marketing Euros can buy.

As long as an individual has a bank account and a 'brass plate' somewhere on the door in Estonia, they are able to apply. At this moment it costs only 50 Euro to apply and to have all the necessary background checks completed. Most of those applying were attracted by the potential to run a business, but the novelty factor is also a strong element. The e-Residency card comes with a reader that allows the user to sign secure official documents on-line, encrypt and transmit documents securely and even to file for her or his taxes. Add to that the low effective tax rate (a zero-rate if the funds stay inside the company) and Estonia has a compelling offer to global entrepreneurs.

Although one has to come physically to Estonia to open a bank account - one of the criteria - the further procedures, as well as running a business, can be handled without setting another foot in Estonia. Digital finger printing and an extensive background check by Estonia's police complete the official procedures. Most of the applicants come from neighbouring countries, Finland and Russia, but 8% of the applicants are from Asia, mainly Japan. Only one percent of applicants have been turned down.

The country has successfully used its first mover advantage. The fact that it is nimble due to its size and collective mindset certainly helps. It has also tackled and built a complex backbone, including databases to move it forward, building up in the process some, although few really solid, barriers to entry. The whole e-Residency started in December 2014, intended for foreign nationals who wanted to enjoy some of the digital services previously available only to Estonians.

Initially, the applicants had to come to Estonia, but within a few months it became available at Estonian embassies and as of May 2015 everybody can complete the application process on-line. Applications are already exceeding the initial expectations. The bottleneck at present appears to be with manual checks against police databases.

It has been rumoured that Lithuania also might move in on this patch. Although Lithuania has top-notch Internet service and an army of tech-savy specialists, Ott Vatter clearly demonstrated that in addition to that the entire legislative, government and a host of departments need to sing from the same sheet to make it happen. That is certainly one of the biggest obstacles for the old-school countries, where the sheer scale may be the single biggest barrier. Meanwhile Lithuania appears to keep its options open.

Indeed, the systems claims to be sure, but questions from the audience about potential hacking indicated that we live in a fragile digital world. Mr. Vatter explained that there had been unsuccessful attempts and that in the event this succeeded, the multiple protection layers, such as a PIN-code protection, would render most of the information that hackers can lay their hands on rather useless.

Estonia may have host the NATO Cyber Security Centre for Excellence, that may appear to some cyber bandits as an appealing challenge to hack into the system. The US Treasury, some top-notch European banks and a slew of American retailers have proven not to be immune. Tallinn may be up to the task. They have a strong argument in claiming that the layers of protection render hacking into the system to obtain personal information useless, very similar to personal PIN protection of bank information.