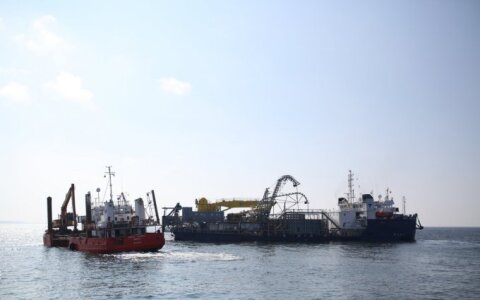 All cable-related works on the NordBalt power interconnection have been completed in the Baltic Sea. The 400km submarine cable connecting Lithuania and Sweden has been protected from vessel anchors and fishing equipment along its most vulnerable sections.

Works on cable deepening and protection with stone rubble placed to cover the cable were launched in mid-May this year. 95 percent of the NordBalt power interconnection with Sweden construction works has been completed, Litgrid reports.

"According to our estimations and based on the experience of our partners at Svenska Kraftnat, that owns four similar cables, investments into cable protection do pay off. If the cable was damaged by an anchor or fishing equipment, it would take up to three months to repair, meaning that no power would be transferred via the interconnection during the repair works. Such an accident would influence the prices on the power market, given that the NordBalt interconnection has the capacity to satisfy almost all Lithuanian electricity demand on a warm summer day," said Daivis Virbickas, Chairman of the Board and CEO of Litgrid, the Lithuanian electricity transmission system operator.

The experience of submarine interconnection operators has shown that cables are usually subjected to physical damage caused by fishing equipment, such as bottom trawls that are drawn along the bottom, scraping it. If such equipment enters deeper into the seabed, it may catch on the cable as well. A certain amount of risk is also posed by larger vessels with powerful anchors that can cut off the cable or damage its armour.

Protection works on the NordBalt submarine cable in the Baltic Sea had been planned in advance, after an assessment of the risk and the experience of other electricity transmission system operators in the laying of similar interconnections. The interconnection has predominantly been protected by burying it in the seabed by using a high pressure water jet. As a result, the cable now lies securely at a depth of approximately one meter below the surface of the seabed. The cable has been buried to a depth of up to one and a half meters in areas that experience a greater amount of vessel traffic. The vessels involved in performing these protective works move at a very low speed, a maximum of 300 meters per hour. A vessel carrying stone rubble set out into the Baltic Sea in August. The stones had been placed onto rocky seabed areas, where burying the cable is impossible. The NordBalt submarine cable laying works were completed in early summer.

"Construction works are coming to an end not only in the sea, but on the land as well. The installation of equipment in the direct current back-to-back converter near the Klaipėda transformer substation will take a little over a month. As soon as this stage is completed, we will launch the power interconnection tests that requires highly qualified and world class experts to participate. The electricity market stakeholders will be notified promptly and on time," said Virbickas.

NordBalt, the 453 kilometre long power bridge with Sweden, will be put into operation in December this year. This is the first electricity transmission interconnection with the Nordic countries. With its capacity of 700 megawatts, NordBalt will open the door to the largest electricity market in Europe for Lithuania, increasing the supply of Scandinavian electricity in the Baltic States by 70 percent.