Gediminas Kirkilas becomes an officer of the French Legion of Honour 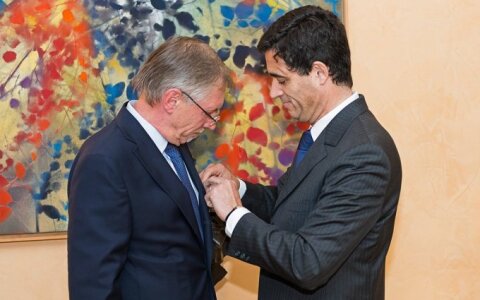 The French ambassador's residence provided the perfect backdrop for a ceremony that saw a happy, somewhat emotional Mr. Kirkilas surrounded by family and friends, receiving one of the highest honours that France bestows on the friends of the Republic. The Lithuanian Prime Minister, Algirdas Butkevičius, Foreign Minister Linas Linkevičius and several other cabinet members where also present on a beautiful summery evening at the residence of the French ambassador.

Mr. Kirkilas is presently the chair of the European Affairs Committee in the Seimas (the Lithuanian parliament). The French honoured Mr. Kirkilas for his role as a strong defender of European values. In a pleasant exchange with the French ambassador, the former prime minister reminded the audience of the long historic link between France and Lithunia. Ever since Napoleon set foot in Lithuania, there has been a strong cultural and architectural French legacy in this country.

But it was the more recent history, particularly the integration of Lithuania into the European Union, were Mr. Kirkilas played an important role. He was the chair of the Foreign Relations Committee in the Seimas from 2000 to 2004, an important period in which Lithuania finally acceded to the EU and NATO. Gediminas Kirkilas also was active in having Lithuania gain access to the euro and assuring the transparency of the European funds allocated to Lithuania. Most recently, he was an active player in Lithuania's first Presidency of the EU Council.

Gediminas Kirkilas becomes an officer of the French Legion of Honour