Lithuania's former ambassador to US to run for parliament with conservatives 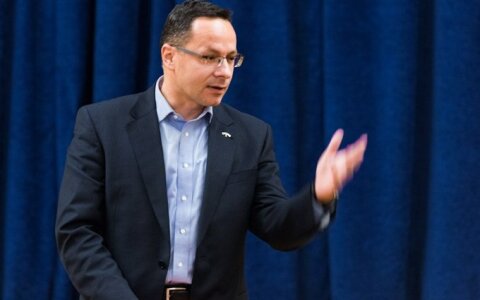 A Vilnius unit of the conservative Homeland Union-Lithuanian Christian Democrats (TS-LKD) has nominated diplomat Žygimantas Pavilionis to run for a parliament seat in the upcoming general elections next year in the Naujamiestis constituency of Vilnius.

"I am very glad that Žygimantas Pavilionis, one of the best Lithuanian diplomats, has decided to go into Lithuania's politics and that the Naujamiestis unit has nominated him as a candidate to the Seimas. His cherished personal values, humanity, vast experience, and expertise in integrating Lithuania into the European Union and strengthening Lithuania's strategic cooperation with the US, as well as his efforts to expand freedom and democracy eastwards, are very necessary to today's politics of Lithuania," said TS-LKD chairman Gabrielius Landsbergis.

Pavilionis has served as ambassador to the United States and Mexico. He is currently working as ambassador-at-large for Europe's East.

Lithuania's former ambassador to US to run for parliament with conservatives