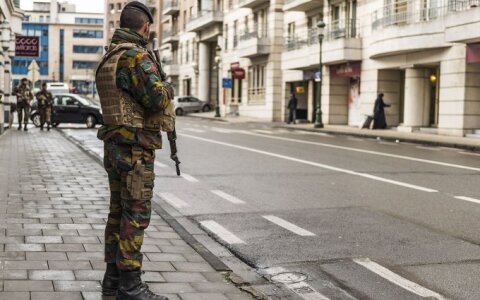 Someone recently described the recent terrorist attacks in Paris as designed in Syria and developed in Brussels. It may very well be. Meanwhile Moscow monitors and actively exploits every turn of the conflict.

During the last days, the Belgian capital looked a bit like a war zone. Following the attack on the offices of Charlie Hebdo and a Paris grocery store earlier this year, heavily armed soldiers were patrolling the streets around the European Institutions and other public buildings. Now, thousands of the military were patrolling the city with military assault vehicles parked in shopping areas. The city's Metro system was completely shut down and, on Monday and Tuesday, schools, many shops and restaurants remain closed. Armed soldiers were posted in front of all hotels.

Former Ambassador to the US, Žygimantas Pavilionis, presently Lithuanian Ambassador at Large for Europe's East, said: "It was nice to be back in Brussels where 13 years ago I finished my duties as the Co-Secretary of the Lithuanian - EU Accession Conference. Then Brussels was still living under romantic enthusiasm of the European unification, firmly framed into the 'end of history' postulate. On Monday, November 23, Brussels was almost paralysed under terrorist threats, with Russian aggression looming in Europe's East and chaos growing in the South." He added, "We have to start shaping our security environment; create our own strategic agendas instead of becoming the victims of others' agendas. It is time to create a clear long-term strategic vision for our neighbourhood than react in most inefficient way and only on tactical level to the madness of autocratic regimes in Europe's East and South."

Several Lithuanian residents living in Brussels worked from home. Vytautė Liutkevičiūtė said: "I live in a very quiet and residential area of Brussels, now the streets are even emptier, with an occasional helicopter hovering above." The mother of a 5-month-old baby said, "Had this happened a year ago, I would have also bravely marched to the office this morning, as many others, to prove a point that we are not afraid and that life must continue as normal." However, with a 5-month-old at home she said that non-essential trips to the grocery store and the pharmacy have been pushed back for later in the week. Just in case.

For years, the police in Brussels have considered Molenbeek, a largely decrepit part of the Belgian capital, as a 'no-go zone'. There has been little change, although numerous police actions and arrests have taken place over the last days. How can it be that parts of metropolitan European cities are 'no-go zones'? Meanwhile many countries, including the US State Department, have issued travel warnings, cautioning vigilance to travellers, particularly heading for extremists' hotspots.

Little notice had been given, nor any additional action taken, prior to what happened on Friday, 13 November, in Paris. It now appears that Omar Obaaoud, a Belgian resident and the alleged mastermind behind the attacks, had been clearly identified by Belgian authorities as a jihadist as early as January. Yet he was able to travel freely in the EU, shuttling between Syria and Europe. Belgium's Prime Minister Charles Michel cited multiple suspects as the reason for closing down most of the city's, public areas. At least 16 people have been arrested, while the main target of the security action, Salah Abdeslam, appears to be still at large.

Clearly, it is not the Muslim religion, the lack of a proper integration policy or the Schengen rules that are the problem. The problem is with the intelligence community that seems unable to share information or properly act before crimes are committed.

The war in Syria initially seemed like an internal conflict in the long line of 'Arab Springs'. Now some observers believe that it may have contained many ingredients for a much larger conflict. More than a million refugees have landed on the shores of Europe and brought the conflict into the neighbourhoods of many West European countries.

Far from it all, Russia is exploiting the entire Syria situation for its own advantage. Russia is manoeuvring to raise its profile on the internal scene. Putin's regime has already paid a heavy price for propping up the Syrian regime with one of its airliners being bombed out of the sky, claiming even more victims than in the Paris attacks. Still, the Russian regime and its political actors appear to take pleasure in blaming the West for looking fragile and uncommitted in the fight against ISIS.

Meanwhile last Saturday's editorial in The Financial Times warned that Russia might further exploit the whole situation to reinforce its sphere of influence in certain parts of the world. This happens in the context of Russia still involved in a 'frozen conflict' Ukraine, not living up to its commitments to implement the Minsk agreement. Putin has and will continue to exploit every weakness in the West to raise the profile of Russia.

Sources say that Putin is looking for a new 'Yalta-style Agreement' to settle spheres of influence. It'd better not happen. We ought to have learned from history. The ever cunning, undermining and constant exploitation of weakness by Putin is not a sideshow in this conflict. It is an integral part and test for the many other tasks that Western leaders face. They'd better face up the reality that the former KGB officer has in store.