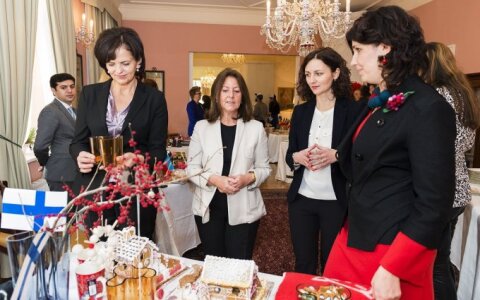 On 5 December, the Christmas Charity Fair in Vilnius will be organised in the Vilnius Town Hall to benefit some of the most vulnerable in society. The International Women's Association of Vilnius celebrates this year the thirteenth edition of the charity fair.

The Fair will bring 35 diplomatic representations and the five international schools together in a charity event that will feature food, drinks, original crafts and jewellery from around the world. This year's co-chairs are Benita Guillaume, the Chairwoman of the International Women's Association of Vilnius, and Ms. Letizia Taliani de Marchio, wife of the Italian Ambassador in Vilnius. Ms. Janina Butkevičienė, wife of the prime minister, is this year's patron of the International Christmas Charity Fair.

Ms. Janina Butkevičienė expressed her pleasure in being involved in an event that celebrates the most important holiday of the year whilst supporting so many needy organisations. She said, "During this period, we seldom think about those in need and disadvantaged and how we can help them to make their everyday life a bit lighter." Co-chair Benita Guillaume explained that all the benefits will go to a number of charitable organisations, including those benefiting children and senior homes as well as a kindergarten for the disabled.

The diplomatic representations of several countries gathered on Wednesday in the Residence of the Italian Ambassador to provide a bit of a flavour of the charity event on 5 December. There will be plenty of specialities, not just food and drinks, but also some original gifts and crafts. Those looking for some excellent ideas for the festive season may just find what they are looking for.

The Israeli Embassy will participate for the first time. Liana Jagniatinsky of the newly opened Israeli Embassy explained that the Bazaar takes place on the Sabbath, but some volunteers will offer some of the country's products. One of the original items will be olive oil made from olives grown in the ambassador's home in Israel. There will also be a cookbook written by Nida Degutienė, wife of the former Lithuanian ambassador to Israel.

Italy, Wednesday's host country, presented some fine foods for which the country is well known. Not just olive oil and wines, but also fresh home-made pasta will be on offer in the Vilnius Town Hall, in addition to some well-known chocolates and hazelnut pasta, and some designer items.

Canada, Turkey and Moldova return after some absence, the latter presenting a variety of wines. Azerbaijan presented some traditional bread and sweets in addition to some jewellery. Finland, well-known for its design, had some artisanal glassware as well as gingerbread houses on offer. Denmark's embassy will bring some home-made cookies and jams in addition to Holmegaard glassworks products from Fensmark and Ecco leatherworks.

Japan presented ceramics and lacquer-ware boxes, probably well-known as typical gifts, but the land of the Rising Sun will also offer jewellery made with famous Uwajima pearls. Ayumi and Nijolė from the embassy also showed furoshiki wrapping. Nijolė explained that furoshiki, made from various fabrics, was also used to carry official documents. Wrapping gifts with this fancy looking cloth will certainly make your gifts stand out from the crowd.

Bianca Mina, a diplomatic councillor from the Romanian Embassy, showed the wine and liquor that will be sold in addition to plastic toys in Romania's national colours. Romania will also offer a line of cosmetics. Armenia had the duduk on display, a traditional and ancient flute made from apricot wood and a bit of a distant relative to the oboe. Some delicious chocolate and silverware will appeal to those looking for an original gift with an Armenian flavour for Christmas.

During the Fair, there will be a lottery in which participants can win valuable prizes whilst supporting a good cause. To entertain the visitors, there will be some traditional dance performances, as well as a choir performing some festive songs. Even Santa Claus will make an appearance.