Eyes and ears in the Far East. Interview with Lithuanian Ambassador in Tokyo 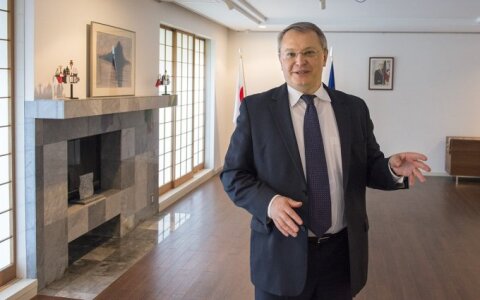 In an interview with the Lithuania Tribune, Egidijus Meilūnas, Lithuania's Ambassador in Tokyo, says people in Japan are starting to discover the Baltic country for its culture, tourism and investment opportunities.

The tight-nit maze of streets in the Roppongi district of Tokyo, one of the Japanese capital's fanciest neighbourhoods, looks from the air as hairlines etched in a dense demographic plate. It is a Japanese national holiday and there are few opportunities for the Lithuania Tribune to ask for directions to the fine building that houses the compact Lithuanian Embassy. Numerous embassies dot the heavily wired cityscape as most of the electricity and communication in Japanese cities are still above ground and some intersections look like intricate spider webs.

We arrive a bit late at a lovely Japanese building that is Lithuania's representation in the Far East. Ambassador Egidijus Meilūnas is a gracious and friendly host, clearly a man that appears well suited to represent Lithuania in a society steeped in traditions with many complex conventions. Japan is home to 120 million people, an intricate hierarchical society, yet with a very contemporary and innovative face.

Our host gives the Lithuanian Tribune a tour of the prestigious-looking building. There is ample space in the Embassy to offer standing room to 125 guests and it can seat about 50 for various cultural, economic and other occasions. The ambassador shows proudly the Japanese publications on various aspects of Lithuanian cultural and social life and many translated books of the country's cultural icons, particularly Jonas Mekas and M.K. Čiurlionis. Ambassador Egidijus Meilūnas informs us that Čiurlionis, the early-twentieth-century painter and composer, is well-known in Japan, mainly for his paintings.

"In 1992, some years before the opening of the Lithuanian Embassy in Tokyo, there was a Čiurlionis exhibition in the Saison Art Museum, also attended by His Majesty the Emperor Akihito," says the ambassador with some pride. The symbolism in Čiurlionis' works appeals to the Japanese mind.

Jonas Mekas is, particularly in Japan, in a league by himself. Mekas has visited Japan and Professor Ikuo Murata has translated all his books into Japanese. There is a Mekas fan base in Tokyo and his experimental films have been shown regularly. It is one of the tasks of the embassy to link the name of this world-famous Lithuanian artist with the country. 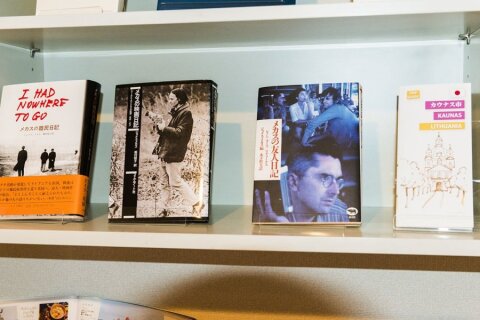 George Maciunas, the founding member and the central coordinator of Fluxus, is also honoured with a Japanese-language book. Not a big surprise, given that he worked so closely with the famous Japanese artist Yoko Ono. George Maciunas, Jonas Mekas and Yoko Ono all shook up part of the established art world and they were all visible parts of the considerable social change that took place in the late 1950, but particularly the 1960s. Seeing all of these Japanese-language publications devoted to Lithuania and Lithuanian artists is impressive, and probably beyond the imagination of most Lithuanians.

We sit down over a cup of freshly brewed coffee and start with a question about the political importance of Japan for Lithuania and the history of diplomatic relations between the two countries.

Ambassador Egidijus Meilūnas: We will soon celebrate, in 2022, the 100th anniversary of diplomatic relations with Japan. Relations started in 1922 with the recognition of Lithuania by Japan. Japan established a Consulate General in the then capital, Kaunas, in 1939 and appointed Chiune Sugihara as a consul there. The work of this outstanding Japanese diplomat is well-known in the context of him (Sugihara) helping Jewish refugees to escape the Holocaust. History prevented our country to continue relations from 1940 onwards, when Lithuania was occupied by the Soviet Union, until much later in the 20th Century. Lithuania opened an embassy in Tokyo in 1998.

Politically, Japan is an important ally for the West, Europe and the USA. We are part of the active role that the EU plays in working with Japan in the geopolitical reality.

Lithuania Tribune: You cover a very large geographic area, not just Japan from your base in Tokyo?

Indeed, this Embassy covers probably one of the largest geographic areas of any Lithuanian embassy. In addition to Japan, we look after diplomatic relations with Australia, The Philippines, New Zealand and Singapore. We do this with a staff of three diplomats and an additional staff of three locals. 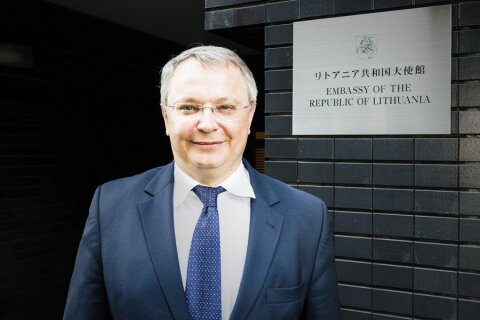 How many Lithuanians live and work in Japan?

We know of about 200 Lithuanians living in Japan. However, more than 20,000 Lithuanians live in Australia, a country that also is served from this Embassy. These Lithuanians are an important link to the home country, particularly in the area of culture, science and trade.

Did any of the Litvak survivors, benefiting from Sugihara's generous deed, remain in Japan?

We have a good relationship with Philip Rosenfeld, President of the Jewish Community of Japan. The JCJ is not aware of any Litvaks living in Japan. Sugihara survivors moved on, mainly to the USA, Canada, Australia and other countries.

Which are the most active areas in the relations between Japan and Lithuania?

We focus a lot on technological, scientific and academic cooperation. There is lot of interest in Japan in the life science projects of Lithuania. A joint science symposium with the Japan Science and Technology Agency (JST) took place last month (October 2015). A very high-profile exchanges between Tokyo University, the Japanese Society for the Promotion of Science (JSPS) as well as several of Lithuania's high-profile universities and the Research Council of Lithuania. Tokyo University is one of the global top 20 universities and we are very glad to be able to work with such a prestigious institution. Lithuanian representatives also participated at international exhibition and conference "BioJapan 2015” in October that attracted some of the brightest in the field and it got a lot of attention in Japan.

In June 2014, the first joint Japan-Lithuania science symposium in cooperation with Tsukuba University and the Japan Society for Promotion of Science (JSPS) took place and, in September of the same year, a delegation from Japan participated in "Life Science Baltics 2014" in Vilnius and they made two presentations. More recently in May 2015, three seminars about life sciences were presented in Osaka and Tokyo, this time in cooperation with Osaka University, the Japan Science and Technology Agency and the Japanese bio-industry association.

Recently, oncologists from both countries started to cooperate and exchange their experience. On Saturday, November 7, in the Tokyo American Club, a joint cooperative presentation between Japanese and Lithuanian oncologist was made in the area of future cooperation. 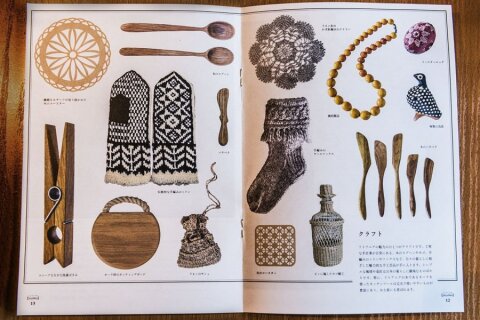 Some of Lithuania's crafts exported to Japan Photo Ludo Segers(1)

Japan is a very complex market with very high standards for service and quality. What are some of the main exports of Lithuania to Japan?

Food from Lithuania has certainly become an important export. We mainly export dairy products, cheese and milk powder to this country. Lithuanian cheese, made by 'Žemaitijos pienas', is now sold in 'Kaldi', a chain of shops. Some of Alita's sparkling wines are offered in restaurants in Tokyo. Lithuanian linen is also exported and much appreciated. Several shops in Japan sell exclusively Lithuanian products. A large shop, IDEE, in the Meguro area of Tokyo now sells Lithuania linen, pottery and wooden products to their customers. Japanese consumers can now also buy Lithuanian goods at “Isetan” (a large chain of department stores). Yet another important export is amber. Amber may very well be one of the most famous Lithuanian products in Japan. Every year in January, several Lithuanian amber companies participate in the biggest jewellery exhibition in Tokyo. AmberRuta has been operating in Tokyo since 1999. Last September, yet another company, Kuji Kohaku, opened their shop 'Amberlogue' in Ginza, with nice jewellery produced of Lithuanian amber.

In the area of science, the scientific laser products from Ekspla and other laser companies that are exported worldwide are also present on the Japanese market. Actually, Japan is by far the most important country for some Lithuanian laser companies in Asia.

In addition to trade, is Japan also an active investor in Lithuania?

At this moment, one Japanese company has been set up in the Klaipėda free economic zone, “Yazaki Wiring Technologies Lietuva”. Yazaki, a very large Japanese company in the field of electric wiring and components, employs about 800 people in Lithuania. In addition to that, several big names, such as Olympus, Hitachi and Konica-Minolta, have representative offices in Lithuania.

What are some of the opportunities for Lithuanian businesses in Japan?

There is certainly good opportunities to expand the exports of food products, textiles and furniture to Japan. There is certainly good opportunity in the area of tourism. Every year in September, Lithuania participates in the biggest tourism exhibition in Asia, JATA EXPO, in Tokyo. We work together with Latvia and Estonia on that one. In addition, we organise about 35 to 40 events in several cities in Japan to present the opportunities for tourism in Lithuania. Interest in our country is growing very rapidly; the number of Japanese tourists grew by more than 40 percent. This year we already enjoyed more than 60-percent growth and we reached by the end of September almost 16,000 Japanese visitors. 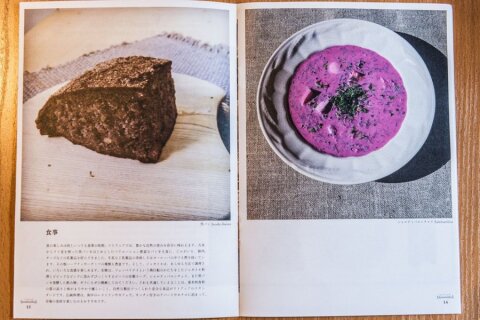 Will the new film about Sugihara-san ('Persona Non Grata') create more opportunities for tourism in Lithuania?

We certainly hope so, and especially having in mind that we have much to offer to Japanese tourists. Certainly, there are the Chiune Sugihara-related places with the most important of them – a building of the former consulate in Kaunas, "Sugihara House", where he worked in 1939-1940. There is also a monument to him and the very popular Sakura garden in Vilnius.

Knowledge about Lithuania in Japan has been growing rapidly over the last years. There are many TV programmes about our country. Moreover, popular magazines like “Ku-nel”, “Skywards”, “Japan Precious”, “Hunt” and many others have published comprehensive articles about Lithuania this year alone.

What may be some of the lesser-known facts about the relations between Lithuania and Japan?

We are very glad to have so many good friends of Lithuania in Japan. One of them is the Japan Lithuania Friendship Association established 15 years ago, and developing its activity in many fields, especially culture. This organisation also helps Lithuanian children suffering from cancer. Then there is the Japan Lithuania Exchange Center, a very active and supportive body in business relations and contacts in scientific fields. The Lithuania Friendship Club in Toyohashi was established in Aichi prefecture (the area around Nagoya, Japan's third largest city) in 2005 when Lithuania took part in World EXPO. We also have many friends in Sapporo and Osaka, where Lithuania has honorary consulates. You can meet many good friends of Lithuania in Utsonomiya, Kyoto, Kumamoto, Hiroshima, Morioka, Yokohama and many other places in Japan. These people-to-people relations lay solid ground for friendship between the two nations and cooperation between the two states.

Do you have particular wishes or ideas that our readers may like to know?

One of our wishes is to get Lithuania discovered by even more people from Japan and other countries as destination for tourism and business. Our modern, vibrant country with beautiful nature has preserved its ancestral traditions, deep historical and cultural roots. Visit Lithuania and enjoy all this in friendly and relaxing atmosphere! Let me also extend my sincere appreciation to the Lithuania Tribune for doing a great job in sharing knowledge about Lithuania with readers from all over the world.

Eyes and ears in the Far East. Interview with Lithuanian Ambassador in Tokyo