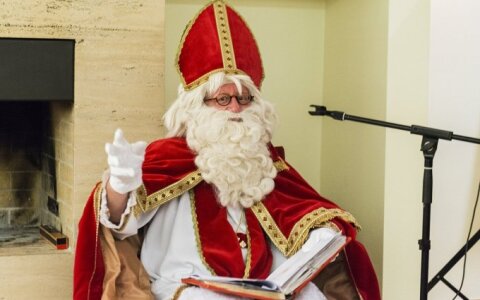 Vilnius is clearly slipping into a festive mood and the international community was clearly contributing Saturday. There was the International Charity Christmas Fair in the old town hall and Sinterklaas arrived in Vilnius, clearly with a bit of a Lithuanian connection.

About 30 families got together on Saturday 5 December in the Dutch Ambassador's Residence to celebrate Sinterklaas arrival in Vilnius. The Dutch Ambassador, Bert van der Lingen, welcomed Sinterklaas (Sint Nic) and his trusted helper, Zwarte Piet (Black Peter). There was also a Lithuanian connection with Wim Brauns taking on the role of Master of Ceremonies. Wim, a Dutchman, is the former coach of the Lithuanian cycle team.

Sinterklaas is a feast that looks somewhat similar to Santa Claus in most Anglican parts of the world, in that an aging, bearded figure distributes gifts to well behaved children. The low lands, (Belgium, The Netherlands, and Luxembourg), and northern France plus a few other places in the world celebrate on 6 December the feast of Sinterklaas (Sint Nic). Like all good mythical figures, Sinterklaas can be at many places at once. The Dutch traditionally celebrate on the evening 5 December, the arrival of Sinterklaas.

There is a whole repertoire of songs to celebrate the arrival of Sinterklaas and the children clearly knew many of these. Wim Brauns, being a good coach, managed to have the (mainly) Lithuanian women sing Dutch 'Sinterklaas' songs. There was also a bit of dancing, but in general, Sinterklaas appeared to know a lot about what goes on in family homes and he knew the children's wishes well. For many these wishes turned into magic as they received gifts that the 'holy man' had brought from his home base in Spain. He also managed to provide some interesting interludes to keep the adults smiling.

There were also some drinks and snacks for the adults to enjoy, including some ginger cookies, but most of the adults enjoyed seeing so many happy faces.

The history and the tradition of Sinterklaas goes back for centuries and has most likely some pagan links too. The French call him Saint Nicolas and he tends to have generally references to a 'holy bishop' or a patron saint of the children. The Dutch adults (and children) have turned this into a major event, celebrated on 5 December. The Belgian, Luxembourgish and French well-behaved children receive their gifts on 6 December.

More recently 'Zwarte Piet' has run into political correctness issues. In Wim Braun's introduction, Peter being black was attributed to the extensive travelling through the chimneys whilst delivering the gifts... Sinterklaas, after all, travels with his horse on the roofs of houses and reads in his book who was, and who was not, well behaved.