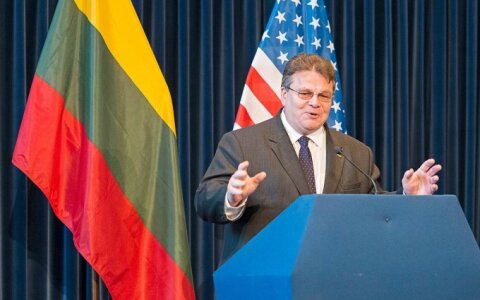 Minister of Foreign Affairs of Lithuania Linas Linkevičius is paying a visit to the United States of America on 7-12 December. There he will meet with US politicians and attend a sitting of the United Nation Security Council (UN SC) addressing the issues in Ukraine.

On 7-9 December, Linkevičius will discuss Lithuania-US partnership, regional security situation and energy matters with officials from the US Department of State, the House of Representatives and the presidential administration. A meeting with Chuck Hagel, former secretary of defence, is also planned.

In Washington the minister of foreign affairs of Lithuania will meet with Georgia's Minister of Defence Tinatin Khidasheli and will visit the Holodomor Memorial to Ukrainian famine victims.

On 11 December, in New York, Linkevičius will participate in a meeting of the UN SC concerning Ukraine, which was initiated by Lithuania. The UN SC will discuss the implementation of Minsk agreements and the human rights situation in the occupied territories of Ukraine. Linkevičius is also going to meet with UN Secretary General Ban Ki-moon.