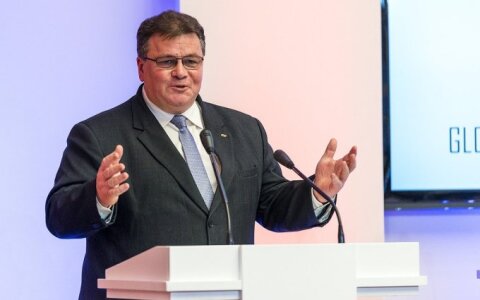 Not enough measures are being taken by the Ukraine to eradicate corruption, according to Lithuanian Minister of Foreign Affairs Linas Linkevičius.

"People are really fed up not only with the war but also with the corruption - to eradicate it insufficient measures are being taken," the Lithuanian minister said in an interview with the Žinių Radijas news radio on Tuesday morning.

Linkevičius said he hoped the resignation of Ukraine's Lithuanian-born Minister of Economic Development and Trade Aivaras Abromavičius "will make people think that time has come for a radical clean-up, not words".

The existing tension in the Ukrainian government "is raising concern for everyone expecting effective reforms in Ukraine," Linkevičius said, adding that a government collapse would lead to even more instability, with an already worsening security situation.

"I believe I'm not the only one disappointed here, there are many. We'll see how things will now be resolved," Linkevičius said.

Abromavičius is already the fourth pro-reform minister in the Ukrainian government to have quit Ukraine's Cabinet since the 2014 revolution. Western countries believe his resignation is a serious signal that necessary reforms in Ukraine are stalling.