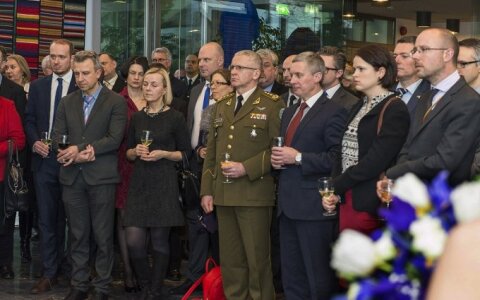 Ambassador Toomas Kukk welcomed members of the diplomatic corps, Seimas members (parliament) and friends of Estonia in the Estonian Embassy in Vilnius to celebrate the 98th Estonia's Independence day.

The celebration took place against a backdrop of Estonian art on display in the Embassy. As such National days demand, it all started with the Estonian and Lithuanian national anthems performed by Erika Kviatkovskaja, accompanied by pianist Aleksandra Kolpakovaitė. The two completed their musical honour with the Ode to Joy, the European Union's anthem.

Ambassador Kukk underscored his welcome with a few examples of the friendship between the two Baltic nations. Lithuania and Estonia just celebrated 95 years of bilateral relations, an event that took place in 1921, and soon both countries will celebrate their centennial in the modern age.

The ambassador is clearly a keen observer, stating that "Estonian and Lithuanian people tend to be too self-critical about themselves and their country," but in the 25 years since Soviet occupation ended, he went on to say, "we should be sincerely proud about what our countries have achieved, including a successful bilateral cooperation."

Strengthening security and defence capabilities are regularly in the news. Connecting the Baltic States with the rest of Europe by road, rail and gas pipelines whilst cooperating in the international arena on foreign policy issues are among the issues that bind the two countries together. Ambassador Kukk clearly enjoyed underlining these successful links to the distinguished audience.

The 'Landmark' exhibition on display in the Embassy over the next few months, organised by the Folk Art and Craft Union, as well as other exhibition and regular concerts allow Lithuanians to discover more about Estonian art in Lithuania.