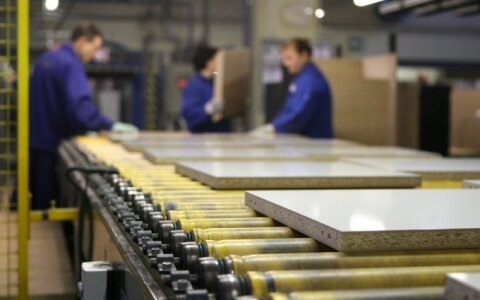 Lithuanian entrepreneurs have been turning away from Russia as their primary market for exports and setting their sight on the Nordic countries. However, different rules apply in Scandinavia, with easy profits hard to come by.

Lithuanian businesses have had some success penetrating Scandanavian markets but the growth of Lithuanian exports to Scandinavia and Finland over the last decades has mostly focused on wood and furniture, accounting for a third of all Lithuanian products sold in those markets.

Lithuanians have also been exporting more chemical products (15.4% of the total, as opposed to 6% a decade ago), and agriculture and food products are up from 6.1% to 13%, according to Enterprise Lithuania.

"We notice that some sectors - furniture, wooden house and other wood product makers - have had a significant breakthrough. The IKEA effect is a good case in point, where the Swedish giant has subcontracted Lithuanian companies for a significant share of orders," said Enterprise Lithuania chief analyst Justas Jurevičius.

The volume of Lithuanian exports to Sweden, Norway, Denmark and Finland are significant, he says.

Lithuanian companies export more to Scandinavia than to Germany, even though the latter represents a market three times the size.

In 2014 (last year's exports data are still to come), Lithuania exported goods and services worth €933 million to Sweden, €734 million to Norway, €776 million to Denmark, €438 million to Finland. Added together, those exports were 20% higher than total exports to Germany.

"The Scandinavian markets are attractive to Lithuanian entrepreneurs, because they are close and because of their wealth, people there have high purchasing power. We know that many companies see them as very enticing markets but not all of them have what it takes to carve out a place for themselves in those markets," Jurevičius said.

Different rules of the game

He did not venture to speculate which Lithuanian business sectors will sustain or increase exports but the chances of Lithuanian businesses will depend on their ability to commit to long-term partnerships rather trying to capture instant gains in the lucrative Nordic markets, Jurevičius said.

He said Lithuanian companies will have to work to establish long-term partnerships and settle for narrower, albeit more stable margins but also, they will have to make sure that their production meets very demanding standards.

For some companies he said that means radically changing their business culture from the one they grew accustomed to while working with partners in the east.

"Low price alone will not bring success in Scandinavian markets - these are very demanding markets and you must be able to offer more. Looking back, the successful sectors that managed to gain a foothold, like furniture makers, had to invest heavily into raising their technological standards. Naturally, these are not simple or quick processes," Jurevičius explained.

This year's conference focused on the Nordic countries and attracted massive interest. Grajauskas said Lithuanian producers are in the process of transitioning from Eastern to Western markets.

One big difference between markets like Russia or Belarus and those of the Nordic countries is that the latter have a lower risk profile and therefore are less profitable. He said that when Lithuanians are making their pitch to Scandinavians, it's better to leave out experience of working in Russia and other CIS countries.

"Consumption is Scandinavian countries is growing stably, but one should not expect big profits in the short-term. Scandinavians still expect lower prices when they buy goods and services from the Baltic countries - be it raw materials or products.

“Overall, the Scandinavian market is geared towards long-term cooperation, entrepreneurs in this region look closely at whether you are serious about long-term goals. As speakers in our conference mentioned, it is not unusual to have to wait several years between making first approaches and signing deals," Grajauskas said.

Still, Nordic markets are neither closed nor hostile to newcomers and are often easer to gain a foothold in than Germany or France, he noted. Demand for high quality of goods and services are high, but not radical.

"Firms need to work harder, but not dramatically so. Entrepreneurs who are innovative or have experience of working with Western markets usually do well. Some entrepreneurs at the conference even said that higher demands turned out for the better - working with the Scandinavians gave them the opportunity to review their business operations, which helped them better compete in the Baltic markets" Grajauskas said.

Jurevičius, chief analyst at Enterprise Lithuania, said that local companies could still work harder to get a better understanding of the Nordic markets and their business cultures.

One key thing to note, he said, is that it is a diverse region and success in one country will not mean that exporters can easily repeat it in others.

"Some companies eyeing the Swedish market, for instance, should know that its retail market is dominated by big players - there are five big chains holding 95% of the retail market.

"Exporters therefore should be prepared to meet scale criteria and be able to make contacts with the main players who manage sales across the country to be able to sell themselves. The structure of distribution channels varies from country to country, and there are also different demands and business mentalities," Jurevičius said.

Lithuanian exporters interested in the Nordic markets should therefore start with one country and focus on understanding the particular conditions and norms there.

One factor that helps Lithuanian exporters is that Scandinavian countries are among the biggest foreign investors in this country, especially in its export-oriented manufacturing industry. For example, there are 150 Swedish companies operating in Lithuania.

However, compared to Baltic neighbours, Lithuania still lags behind. Swedish companies in Estonia number over 900 which indicates that Lithuania is still a relatively undiscovered market for Swedish entrepreneurs.

To change that situation, effort and investment will be needed to sell Lithuania as a Western country that adheres to high standards, said Jurevičius.