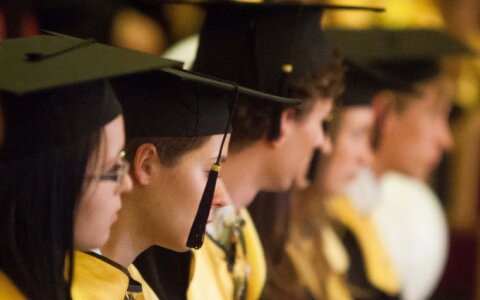 The European Humanities University (EHU), a Vilnius-based Belarusian school in exile, is holding a donors' conference on Thursday to discuss the university's finances and future role.

Among those invited to the donor conference are representatives of Foreign Ministries and development cooperation ministries and international organizations from European Union and other countries.

The EHU moved to Vilnius 10 years ago to escape persecution by the government of Belarus' authoritarian President Alexander Lukashenko.

"The donor conference is not only held to mark the decade of operations, but also to draw the guidelines for the future. We believe the university should expand its vision and mission, without doubt, without losing its Belarusian trace," Lithuania's Foreign Minister Linas Linkevičius told BNS.

In his words, just like any autonomous organization, the university has to deal with challenges, including those related to its management.

The conference will discuss sponsorship and changes in the ways of sponsorship.

"This is one of the most successful tangible projects. It is not a political project, it is an educational institution and a European research institution. Its connection to Belarus is important," said the minister.

Established in Minsk in 1992, the European Humanities University was forced to terminate its operations in Belarus in 2004 due to pressure from the Belarusian regime. The university reopened in Vilnius in 2006.

Over the last decade, 1,468 students graduated from the university in Vilnius, in addition to about 800 EHU diplomas awarded in Minsk.

The European Union's Culture and Education Commissioner Tibor Navracsics said during the donor conference that EHU graduates should bring democratic values to their home country.

"You may ask why do we fund EHU – we want to support young Belarusians, in particular those who are seeking an independent education, somewhere they can learn in an open, free environment," Navracsics, of Hungary, said on Thursday.

"I hope that when they graduate and return to Belarus, these students bring with them the democratic values and skills they have learned during their time here in Vilnius," he added.

In his statement, the commissioner thanked Lithuania for hosting the university and for the past decade of support. In his words, the university is a high political priority for Brussels.

Navracsics stressed that since the university moved to Vilnius in 2006, the majority of graduates have been Belarusian citizens of whom about 60% return to their home country.

In his words, the Commission is "looking forward to seeing the university's new strategy which will guide this development for the coming years".

The university is currently holding negotiations with Lithuania's Education and Science Ministry over the possibility to offer new premises in central Vilnius.

"I wish you every success with your new premises and this new face for the EHU, hoping always, of course, that some day the EHU will be able to return to Belarus," he added.

A year ago, the university's leadership came under criticism from Belarusian public figures and the opposition over authoritarian rule.