Perceptions of terrorism: Number of deaths from attacks in Europe has plummeted 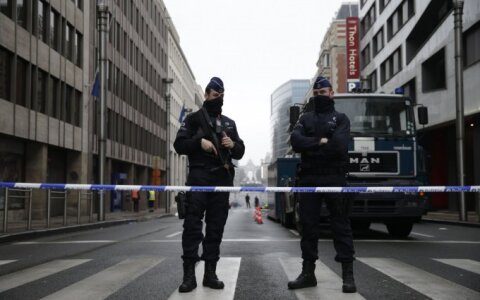 The number of European citizens killed by terrorists has actually been annually plummeting since the mid-1980s, reaching an all-time low in the noughties according to an analysis by Five-Thirty-Eight.

Up to 400 people were killed annually in terrorist attacks in Europe in the 1970s and 1980s in particular, compared to an average of just under 50 deaths annually (and often fewer than 20) all through the first decade of this century.

With the exception of 2005 when the Madrid metro was bombed, civilian casualties from terrorist attacks in Europe all through the noughties were a fraction of what they were in the 1970s through to the 1990s, data from Global Terrorism Database shows.

As Oliver Wietlisbach writes on Swiss news portal, Watson.ch, most European terrorist organizations of the last century have dissolved or abandoned the armed struggle (IRA, ETA) and this is reflected in fact that the number of victims has fallen sharply in Europe since the 1990s. 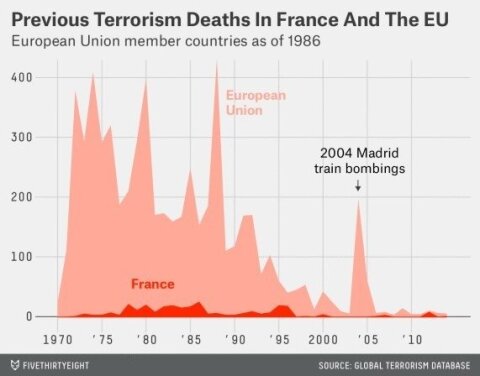 This runs counter to the growing perception across Europe that the terrorist threat to civilians in recent years has been higher than ever. Since 2005 the vast majority of victims of terrorism worldwide have been Muslims (80%) with the conflicts in Iraq and Afghanistan taking a huge toll, writes Wietlisbach.

However, the perception of the increased threat from Islamic extremists in Europe is supported by Europol figures showing the number of arrests for religiously inspired terrorism in Europe annually has more than doubled between 2010 and 2014 from 179 to 395. 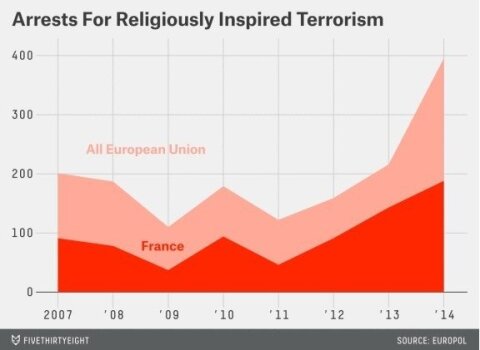 On the other hand, the number of arrests related to separatist or ethno-nationalist terror attacks has halved in Europe in the same period from 349 to 154 Europol figures show, with the number of actual attacks also falling by more than half, from 160 in 2010 to 67 in 2014. 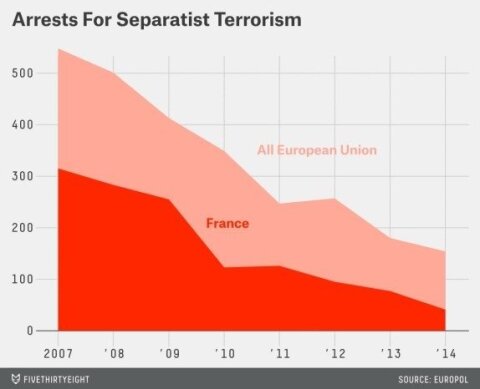 In Europe, between 2001 to November 2015, 611 people died in terrorist attacks with 419 of them dying in attacks by Islamist groups.

However, even with the Paris attacks in 2015, and the massacre by Anders Bering Brevik in Norway in 2011, the annual number of civilian deaths from terrorist attacks in Europe from 2010 to 2015 averaged around 50 a year, compared to well over 200 deaths every year in the 1970s and 1980s.

In the wake of the Brussels bombings, Five-thirty-eight showed that attacks targeting public transportation have been declining steadily in Western Europe and North America since the mid-1990s. 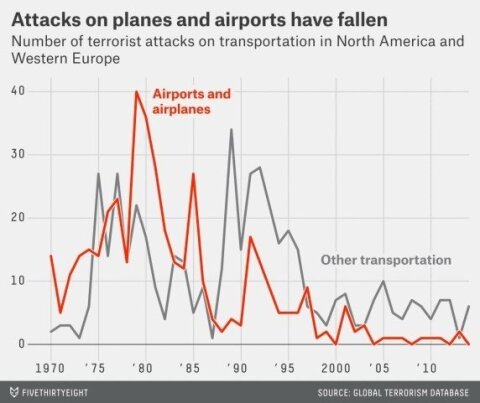 Globally the concentration of terrorist attacks has shifted from Europe and South America in the 1970s and 1980s to the Middle East and North Africa in recent years, analysis by Watson.ch shows.

In Lithuania’s case, the threat of a terror attack is consistently rated by Lithuanian security agencies as low, and this low threat level has been reiterated in the wake of the Brussel’s bombings.

The chances of dying in a road accident are far higher in Europe than the possibility of dying in a terrorist attack but because of the profile and nature of these attacks, they occupy a much more significant place in people’s minds.

While there is no doubting the real threat of attacks from Islamist extremists in Europe, with many European countries on the highest level of alert - meaning they consider the threat of attacks eminent - this needs to be balanced by the reality that the number of fatalities from terrorist attacks in Europe is now far lower than in previous decades.

This means that even with the so-called Islamic State hell bent on carrying out more terror attacks across Europe, viewed through a historical lens, Europe is a far safer place for its citizens now than it was in the 1970s, 1980s, or 1990s.

Perceptions of terrorism: Number of deaths from attacks in Europe has plummeted