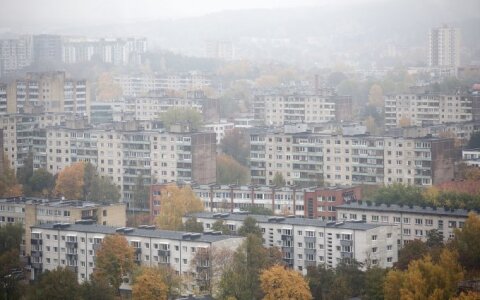 A Lithuanian needs to spend nearly 80% of the average wage to rent a one-room apartment in the centre of Vilnius, much higher than the proportion that people in other Baltic States have to spend.

“It appears that to rent a one room housing in the capital's center while only earning an average salary, is theoretically possible but practically difficult to imagine. Economists advise to allocate no more than a third of income for the necessities, including housing rent,” said Evaldas Narbuntovičius, Domoplius.lt project manager.

Meanwhile, it is almost impossible for a person getting an average wage to rent two or three room apartment in Vilnius. For example, currently two-bedroom apartment for rent in the old town of the capital costs an average of €611, further from the center - €333.

Narbuntovičius said in comparing average wages and rental prices in Lithuania to Latvia and Estonia, it is apparent that Lithuanians have the least advantageous conditions to rent. While earning the least, they have to spend the highest part of the average wage for the rent.

Some of the best cities in Europe to rent a one room apartment in the center of a capital city are in Norway and Sweden where it would require only just under a third of the corresponding national average wage.