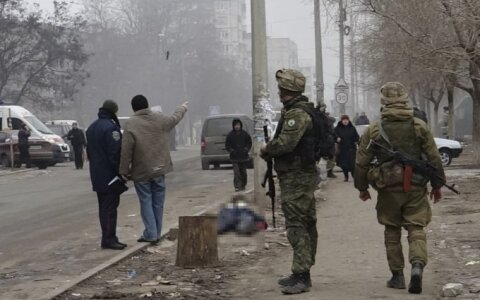 The Kino Pavasaris international film festival in Vilnius hosted the Lithuanian premiere of the documentary film Mariupolis, directed by Mantas Kvedaravičius, last Friday. The film is a documentary about the war in Eastern Ukraine.

The film, named after the city of Mariupol in Eastern Ukraine, focuses on the everyday lives of the city’s residents, who live in constant fear of the war between pro-Russian rebels and Ukrainian government forces. The director dedicated his work to the poets and shoemakers of Mariupol. The film was made with the cooperation of Ukrainian, German, French and Lithuanian filmmakers.

“Three of us filmed it – me and two directors of photography. We tried to spend as much time as possible with the people, but the war made our time together pass faster. There is no time to look at the camera when bombs are exploding around you,” said Kvedaravičius after the screening.

Both film professionals and politicians were in attendance at the premiere. Dalia Grybauskaitė came to see the premiere, and it was her first time attending Kino Pavasaris. Vytautas Landsbergis, who played an integral part in the restoration of Lithuania’s independence, also attended. Both politicians have been vocal supporters of Ukraine’s fight for independence during the current armed conflict.

“In Maidan, Ukraine made European choice. Nobody can stop You. Slava Ukraini!” – wrote the President on Twitter a few days before the premiere, reacting to deliberations on an agreement between the European Union and Ukraine.

The premiere was also attended by Mariupol-based Ukrainian journalist Irina Prudkova, who helped Kvedaravičius in the filming process.

Mariupolis' world premiere was at this year’s Panorama section at the Berlinale festival, where it was nominated for the Amnesty International Film Prize. The documentary was also screened in the documentary competition programme at Asia’s oldest international film festival in Hong Kong just a few weeks ago.