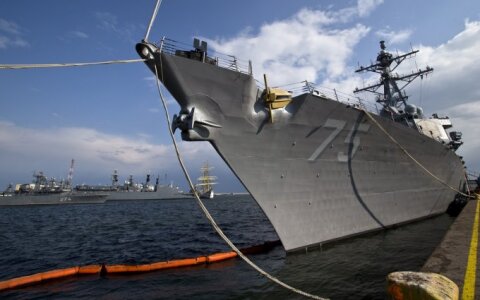 Several Russian Su-24 attack aircraft conducted a “simulated attack profile” against the USS Donald Cook warship in the Baltic Sea, with one of the jets on Tuesday flying within nine metres of the destroyer.

The USS Donald Cook was in the Baltic Sea conducting a training exercise with a Polish helicopter. It is heading to the Lithuanian port of Klaipėda on Thursday.

Two of the incidents in international waters occurred on Tuesday. In a third incident, Russian aircraft passed the US warship at a greater distance on Sunday, according to CNN sources.

According to one defence official, this particular run-in with the Russians is “more aggressive than anything we’ve seen in some time.” The Polish helicopter’s operations were interrupted by the overflight. 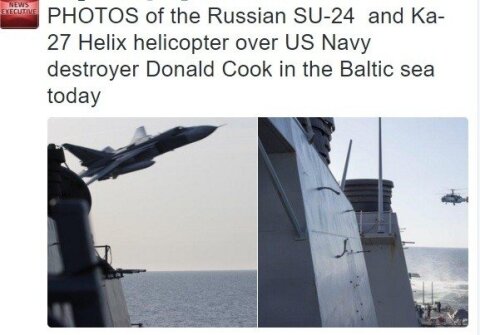 “We have deep concerns about the unsafe and unprofessional Russian flight maneuvers,” US European Command said in a statement, according to The Washington Post. “These actions have the potential to unnecessarily escalate tensions between countries, and could result in a miscalculation or accident that could cause serious injury or death. U.S. officials are using existing diplomatic channels to address the interactions, while the incidents are also being reviewed through U.S. Navy channels.”

The US embassy confirmed on Thursday morning that the ship had arrived in Klaipėda for a scheduled port visit.

According to the US military, the incident occurred in international waters in the Baltic Sea some 70 nautical miles off the Russian exclave of Kaliningrad.

Ignas Stankovičius, a security policy expert, said that such incidents involving the Russian military were not new.

"This is a demonstration of power. They are sending the message that 'we are not weak, we are to be reckoned with'," he told BNS on Thursday.

According to the expert, similar incidents could trigger greater incidents at a time of high political tension.

"If political tensions were very high and there was a real probability of military conflict, then such flyovers could provoke. It also depends on what sort of flyovers these are. Basically, this is aggressive," he said.

The USS Donald Cook's visit to Klaipėda had not been announced to the public in advance.

The US embassy said in a press release on Thursday morning that "such port visits serve to enhance US-Lithuanian relations as the two nations work together for a stable, secure and prosperous region".

"This will be an excellent opportunity to strengthen relations and enhance maritime interoperability and improve NATO’s security," Commander Matthew Powel, executive officer of the USS Donald Cook, was quoted as saying.

The ship sailed out of the Spanish port of Rota on March 16.

US European Command released videos on Wednesday, showing the Russian jets' approach of the US warship.