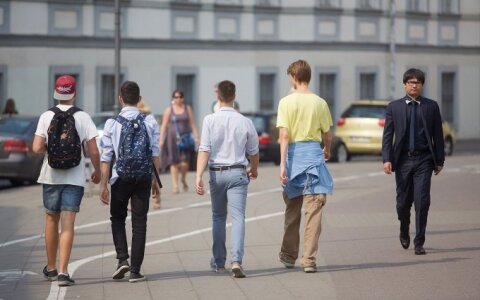 A British university is to fly 15 potential students from Lithuania to Britain to visit the university, see its facilities and meet its teaching staff - something unheard in Lithuanian universities.

“I do not know whether it can be called a promotion – it is a part of a career program so students can choose a speciality properly. Ideally, you should check the university, facilities, teachers and other things. It is not yet popular in Lithuania,” said Rytis Jurkėnas, the head of education companies' Kalba.lt and Ego Perfectus.

Jurkėnas pointed out that the number of students in Lithuania was declining overall but the numbers of those who are interested in studying abroad is increasing.

“This year we see more and more young people travelling abroad to study. However, the increase is not large - about 10%,” said Jurkėnas.

“However, the vast majority of Lithuanian school graduates choose to study in Lithuanian higher education institutions. Studying abroad is certainly not a widespread phenomenon, even if we look at where do students who get top marks in exams go, a very large part of those who get perfect scores on graduation still stay in Lithuania,” said Jurgita Petrauskienė, manager at the My Science and Higher Education Monitoring and Analysis Centre (MOST).

The most popular destiniations for Lithuanian students remain the United Kingdom and the Netherlands, while the flow of students going to Denmark has fallen significantly.