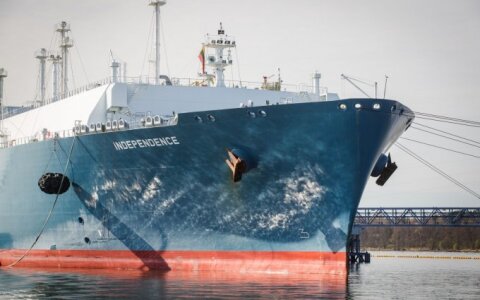 Lithuania’s Energy Minister Rokas Masiulis has said that Lithuania is still looking to purchase the Norwegian-owned LNG terminal moored in Klaipėda port in an effort to reduce gas prices in Lithuania further.

Masiulis was speaking ahead of a visit by the Minister and Prime Minister Algirdas Butkevičius to Oslo this week. Norway's Hoegh LNG owns and operates the ship under a 10-year charter contract with Lithuania that expires in 2024.

"We are seeking to purchase the vessel early and my position is that this could make the gas in Lithuania cheaper, because if we acquired the terminal, we could spread its costs over a longer period of time and reduce the terminal-related tariff component by around 20%," said Masiulis.

Masiulis said it would cost about €15 million to purchase the ship but at the moment the owners were not interested in selling.

Lithuania’s Prime Minister and Energy Minister along with the chief executive of state energy group Lietuvos Energija are to meet officials from Hoegh LNG and Statoil during their visit to Oslo on Tuesday and Wednesday.