Valančiūnas steps up for Raptors but can’t prevent Miami win 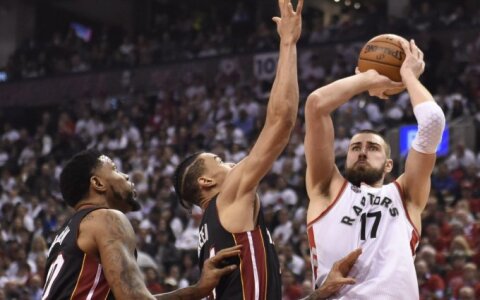 Jonas Valančiūnas put in another stellar performance for the Toronto Raptors last night but couldn’t stop the Miami Heat from taking the first game of their second round play-off series in overtime.

Lithuania’s Valančiūnas had a phenomenal 24 points and 14 rebounds but even with Kyle Lowry’s improbable three-pointer from his own half of the court to take the game to overtime, Dwayne Wade again proved the difference.

The Heat star stripped the ball from the Raptors DeMar DeRozan with seconds left and sank a three-point shot to seal the victory for Miami 102-96. Wade had 24 points, four assists and six rebounds, hitting 3 for 3 from three point range.

Toronto coach Dwane Casey said: "Game 1, you've got to be on point. You can't have some of the mistakes that we made, turning it over. We'd get stops and lose it back, not rotate quick enough in some of the situations."

The Raptors go-to men failed to fire with DeRozan shooting just over 40% from the field for 22 points and All-star guard Kyle Lowry hitting just 23% for seven points.

Valančiūnas was Toronto’s top scorer and added three blocks and two steals to his dominance in the paint, but still couldn’t stop the Heat outrebounding Toronto 52 to 41.

Valančiūnas steps up for Raptors but can’t prevent Miami win