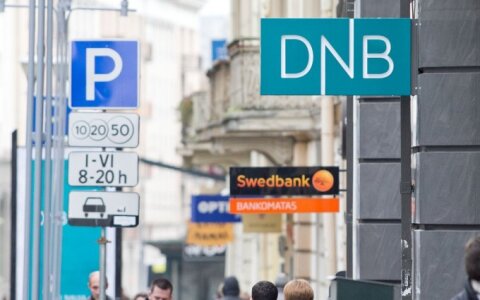 The beginning of this year has been successful for Lithuania's banking sector, with most banks reporting profit growth despite historically low interest rates.

Finance expert Mantas Valužis said that the good results are surprising given the level of benchmark interest rates.

"The conclusion that begs itself is that, despite low or even negative interest rates, the banks find opportunities to keep their margins," he tells DELFI.

This means, he said, that even in a near-zero interest environment, banks find ways to issue loans at relatively high fixed interest rates.

"This is traditional banking," he adds.

Stasys Kropas, the president of the Lithuanian Banking Association, disagrees, however. Although banks do indeed derive most of their income, about two-thirds, from interest on loans, he said, the margins were low. "I do not know of any European country with lower [margins]," he said.

Both businesses and individuals can borrow cheaply in Lithuania, he insisted. "In Sweden, Finland or Norway, securing a loan is more difficult than in Lithuania," he told DELFI.

Valužis, who is account manager at the consultancy Finansavimo Sprendimų Centras, warned that the financial crisis which started in 2008-2009 is not over yet, as evidenced by the absence of inflation despite the abundance of cash in the markets, especially in the eurozone.

"The crisis is well hidden, but it is not over yet. It has taken on a different form, which is why central banks are less certain what to do," he said.

Most commercial banks operating in Lithuania released their results for the first quarter of 2016 last week, indicating that the banking sector is doing well.

Swedbank has reported €22 million in net profits, 3% more than in January-March 2015. DNB made €9.4 million, a quarter higher than the bank's profit during the same period last year.

Of the three biggest banks, only SEB Bank reported a smaller profit than last year. SEB's net unaudited profit in January-March was €11.3 million, while the corresponding figure from last year was €18.2 million.

"Banking revenues have been negatively affected by the negative interest environment," the bank's president Raimondas Kvedaras said in a statement.

Interestingly, Šiaulių Bankas, which has much smaller assets, reported €17.7 million in net profit. It is more than SEB made and a three-fold increase on Šiaulių Bankas' own performance a year before.

"They successfully swallowed up Ūkio Bankas and Finasta, have optimized their operations and hit the market segment which is currently on the up, credit cards and overdrafts," Valužis said, explaining the success factors of Šiaulių Bankas.

Investors have responded to the good results - Šiaulių Bankas shares jumped 4.1% after the report.

Valužis added, however, that a big chunk of Šiaulių Bankas' profits came from early repayments or refinanced loans.

Why would borrowers choose to repay their loans early?

Valužis said: "They could be influenced by their experiences during the loan crisis, they might want to keep a good balance without much debt and feel more secure.

"On the other hand, some might have given up expansion plans, even though they had taken out loans before. But the reasons might be different, say, people have more disposable income and use them to reduce their liabilities."

As a result, total private debt in Lithuania is going down, which is a welcome development, Valužis said.

With interest rates so low, commercial banks are looking for ways to maximize their revenue.

SEB said in its statement that it approved 43% more mortgage deals year-on-year, while Šiaulių Bankas is tapping into the housing renovation programme. Swedbank says it managed to up its profits by maintaining stable revenues and cutting costs by 11%.

Valužis said that other banks, too, have wiggle room in this area to drive increased profitability.