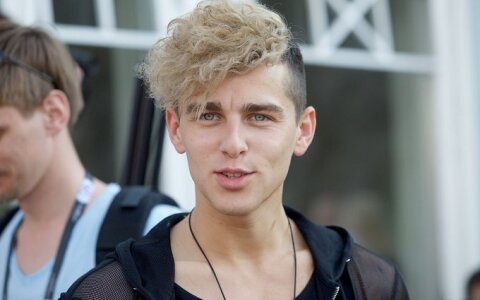 This week has been all about Donny Montell's hair in Stockholm where the Lithuanian Eurovision performer switched from a smooth hipstery coiffure to something in the vein of the 80s perm craze (think Olivia Newton-John in the final number of Grease). If that sounds trite, you should not underestimate Lithuania's investment into doing well at Eurovision.

Donny Montell, or Donatas Montvydas, is performing his "I've Been Waiting For This Night" on the Eurovision stage in Stockholm tonight, the second semi-final after which only ten out of 18 countries will move on to the finals on Saturday.

Even the country's president will be watching, as she herself assured Donny during a phone conversation on Thursday morning.

Donny is appearing in the ninth spot and will be competing against countries like Latvia, Ireland and Norway, which is good news, since it means that Lithuanian expatriate communities in those countries will be on their phones voting him into Saturday's finals.

Related articles
Eurovision: What critics are saying about Lithuania's entry
What are the odds of Lithuania's Donny Montell winning Eurovision?  (1)

We urge our non-Lithuania resident readers to take it no less seriously than the president and support Donny, especially if you like the song.

As for his hair, we have been assured that Donny is naturally curly and the new do is just him skipping his morning routine with a flat iron.