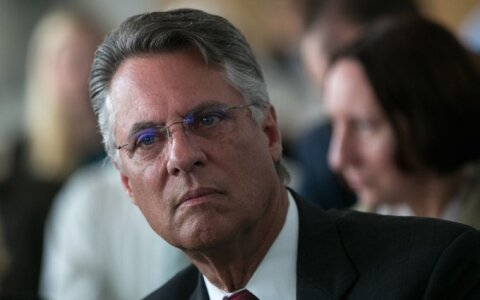 Professor David Pollick is leaving the Vilnius-based European Humanities University after two years as its rector, the acting chair of the school's board Anne Lonsdale said on Friday.

Lonsdale said in a press release that Prof. Pollick was supposed to leave the Belarusian university-in-exile this spring, but agreed to stay on until the end of summer.

"It has always been clear to us on the Board that Prof. Pollick had intended to be with us for two years only. I am so grateful that he has agreed to stay longer to help us cover the period before a new Rector can be in post," Lonsdale said.

"We laid some heavy responsibilities on him to create and implement a strategic plan while simultaneously achieving a major downsizing of the University in response to declining student numbers in the region and the need for heightened cost effectiveness. This is an extraordinarily difficult management task, but through his outstanding academic leadership and the very positive support of his EHU colleagues, it is on line to be completed before he leaves us in summer 2016. We are very much in David’s debt for his tireless work for the University and wish him the very best for his next adventure," she continued.

Prof. Pollick came to EHU first in March 2014 as a consultant and later became a candidate for the vacant post of rector created when Professor Anatoli Mikhailov was named as University President in 2014.

He said: "It truly has been my pleasure and honor to work alongside and behalf of so many persons dedicated to securing and advancing the original values of the European Humanities University at such a critical time in its young history. President Prof. Anatoli Mikhailov's vision for a European democratic education for his home country of Belarus, as well as his special friendship, has been inspiring and dear to me personally."

The announcement follows an audit report, which was leaked to the media, suggesting that Prof. Pollick was paid around €14,000 a month for his services. Moreover, the Belarusian website Bel.biz reports, drawing on the report, that Prof. Pollick was reimbursed USD 104,000 (€92,200) between June and September last year for travel and accommodation expenses.

The European Humantities University, which has been operating from Vilnius since 2004, is to begin an international search for a candidate to replace Prof. Pollick. The school's Governing Board expects to appoint the new rector by September this year, according to the press release.

The Nordic Council of Ministers, which used to contribute some €500,000 to the university's budget, recently announced its decision not to extend its financial support. The Lithuanian government sets aside €200,000 for the European Humanities University each year.

The school's international donors will be coordinated by the Swedish International Development Cooperation Agency.